Villierstown. A village of the river.

Recently, while taking a trip along the Blackwater valley I found myself passing through the small village of Villierstown. It was quiet early on a Sunday morning and the village looked so lovely on that cold foggy morn that I decided to stop and take a few pictures. 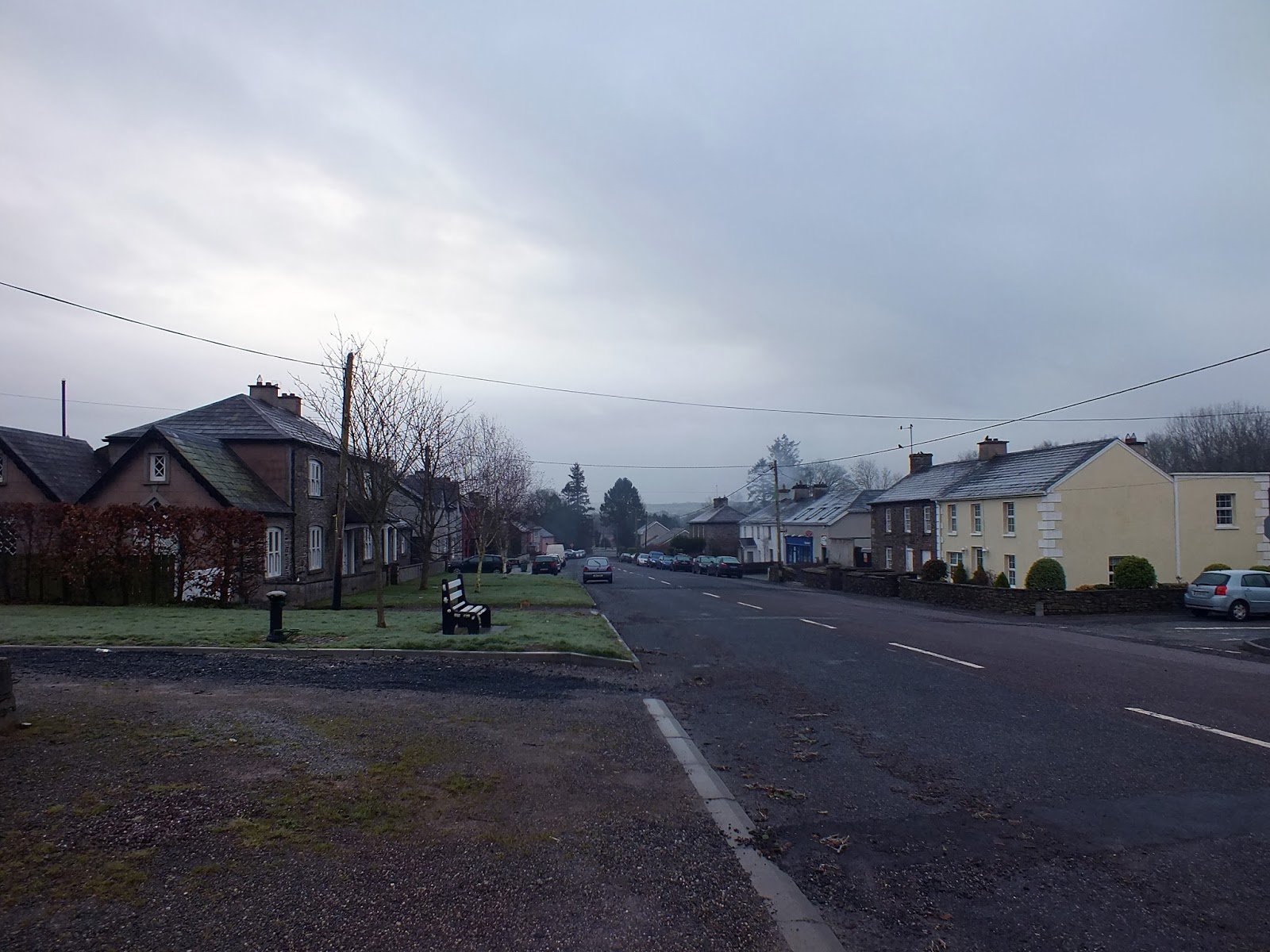 Villierstown on a cold foggy morning.

Villierstown has an unusual history in that rather than growing from small beginnings as a couple of traditional Irish cottages it was actually planned out and developed by the Villiers-Stuart family who were the landed gentry of the area. In the time period of the 1700s there was a substantial linen industry in the area and the village was set up to provide accommadation for the linen workers some of whom were brought from Lurgan in the northern part of the country.  Most of these buildings were put up in the 1740s and the majority of them are still standing today. The Villiers-Stuarts were a well liked family at the time and still to this day there are signs of their interest in the village to be seen.
In 1826   Henry Villiers-Stuart  caused quiet a stir when he was elected to parliament championing the cause of Catholic Emancipation which did not go down well with his fellow protestant MPs. He later married a catholic lady from Austria. 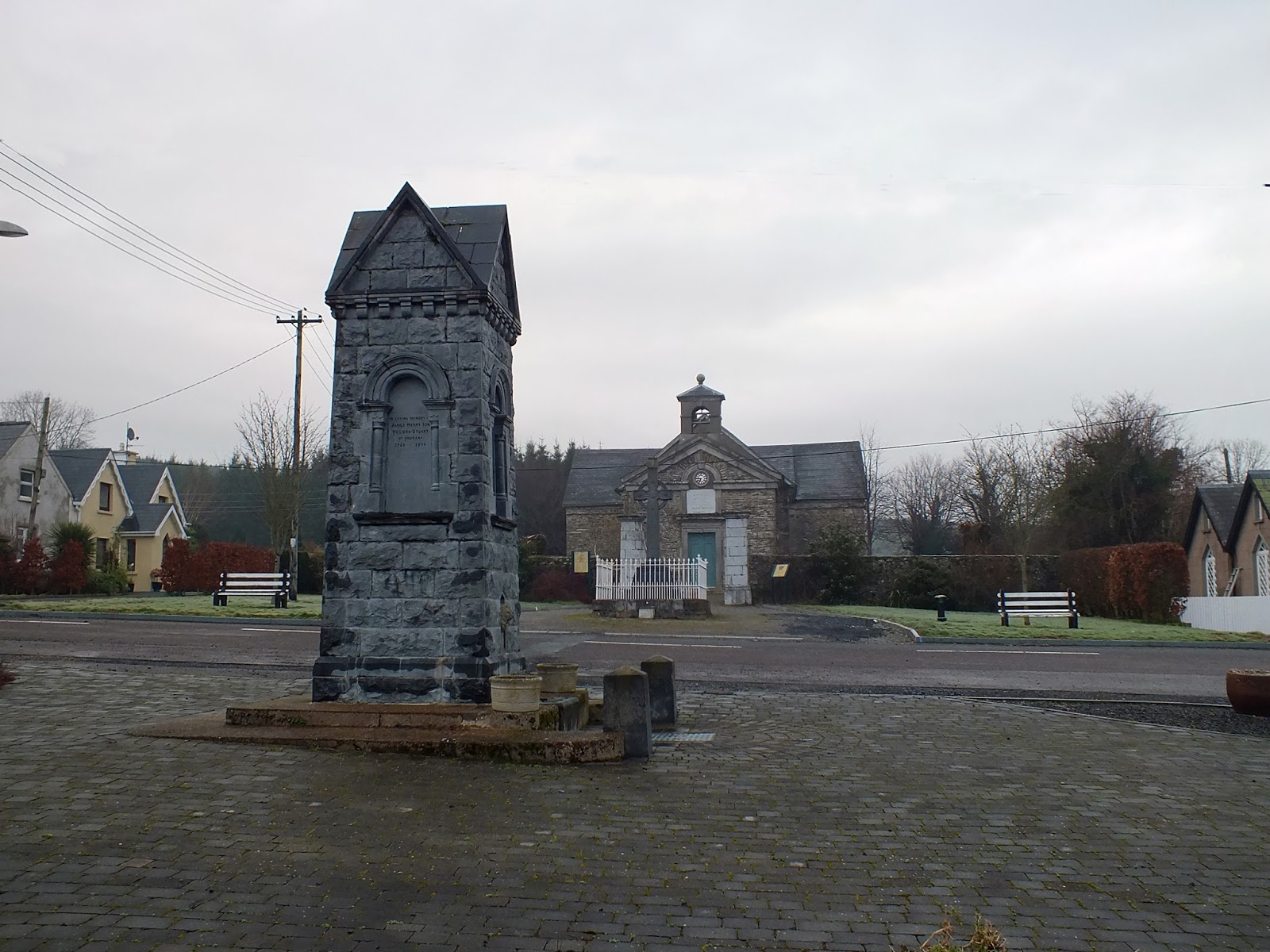 The above picture shows a memorial to the Villiers-Stuart family in the foreground, with the original church to the rear. The church is no longer a place of worship but has been given to the local community for public use.

The linen industry is now long gone and the industry of salmon fishing has followed it but the river Blackwater still plays an important role in the community, and during the summer months the pier which was built by the Villiers-Stuarts is a hive of activity for water-skiers and other leisure boaters many of which come from Youghal downstream or Cappaquinn upstream on a Sunday and stroll up to the village for a pint.
A more modern champion of Villierstown is undoubtably the athlete John Treacy who had an illustrious career as a long distance runner including a silver olympic medal in the marathon at the Olympic Games in Los Angeles in 1984. To this day he still has an involvment with the Irish Sports Council.

Villierstown, a small village of only a few hundred people, but an interesting place to include in any spin around the countryside. 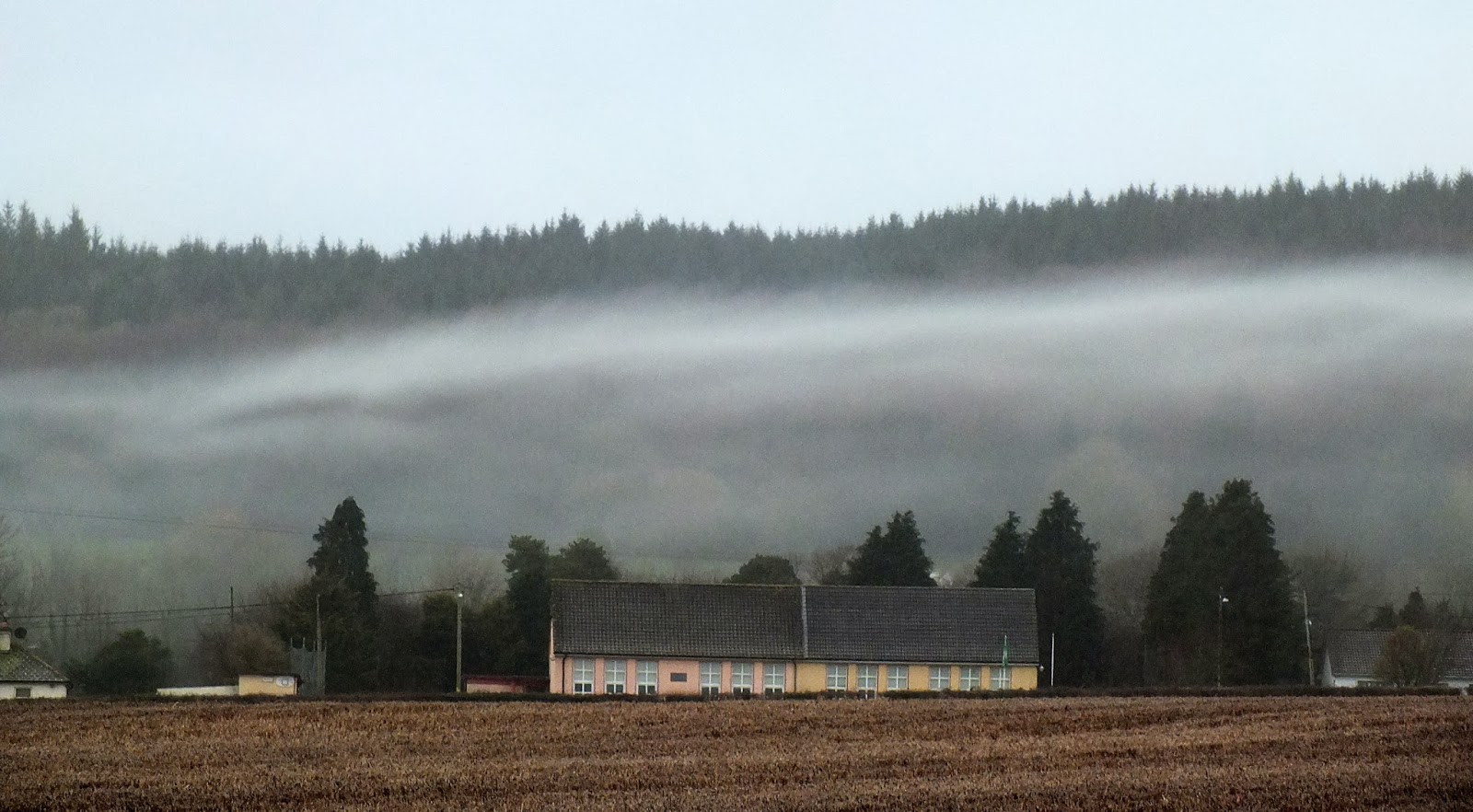 Villerstown school tucked under Dromana hill as a wispy fog lingers in the cold of the morning. 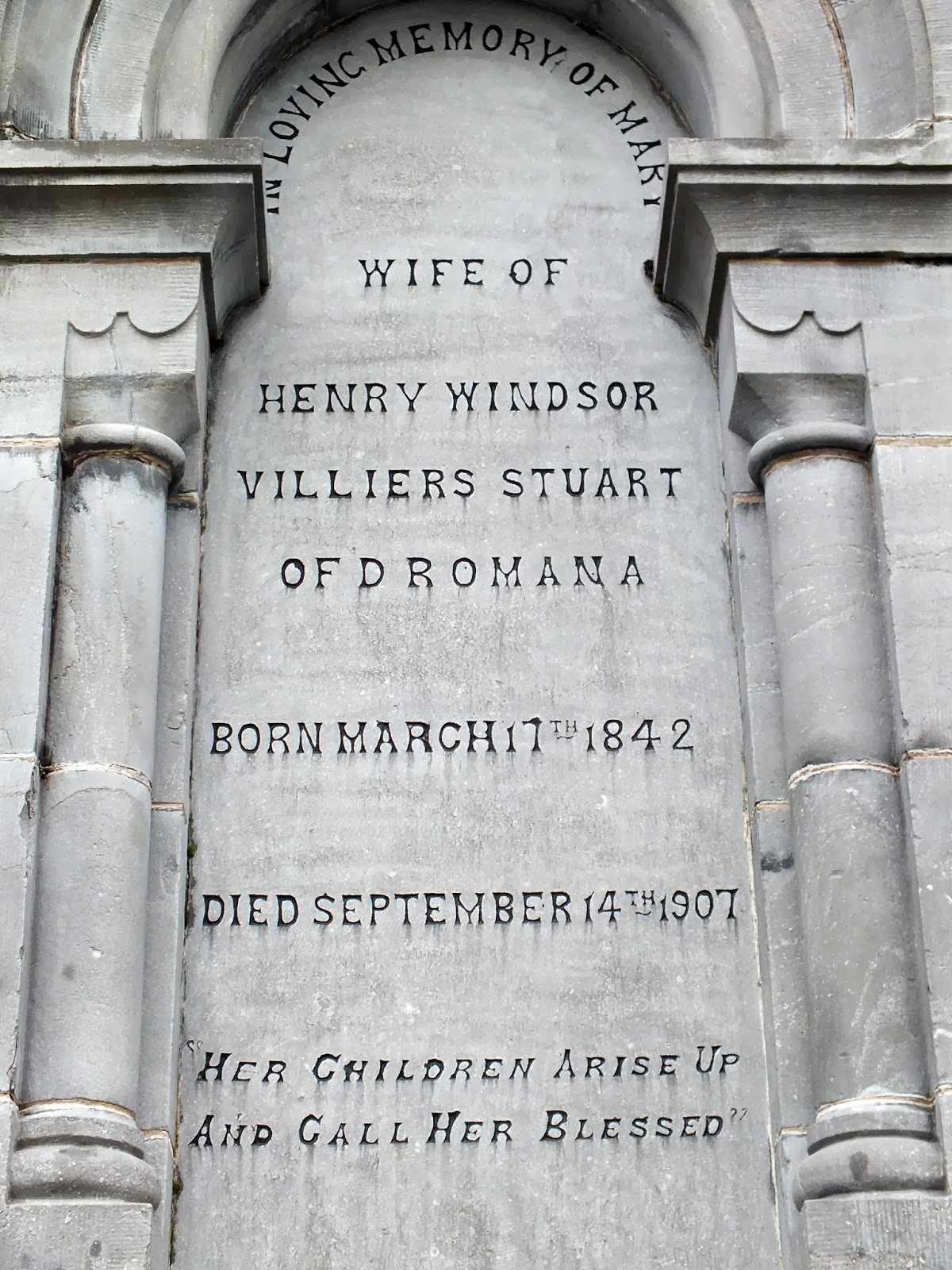 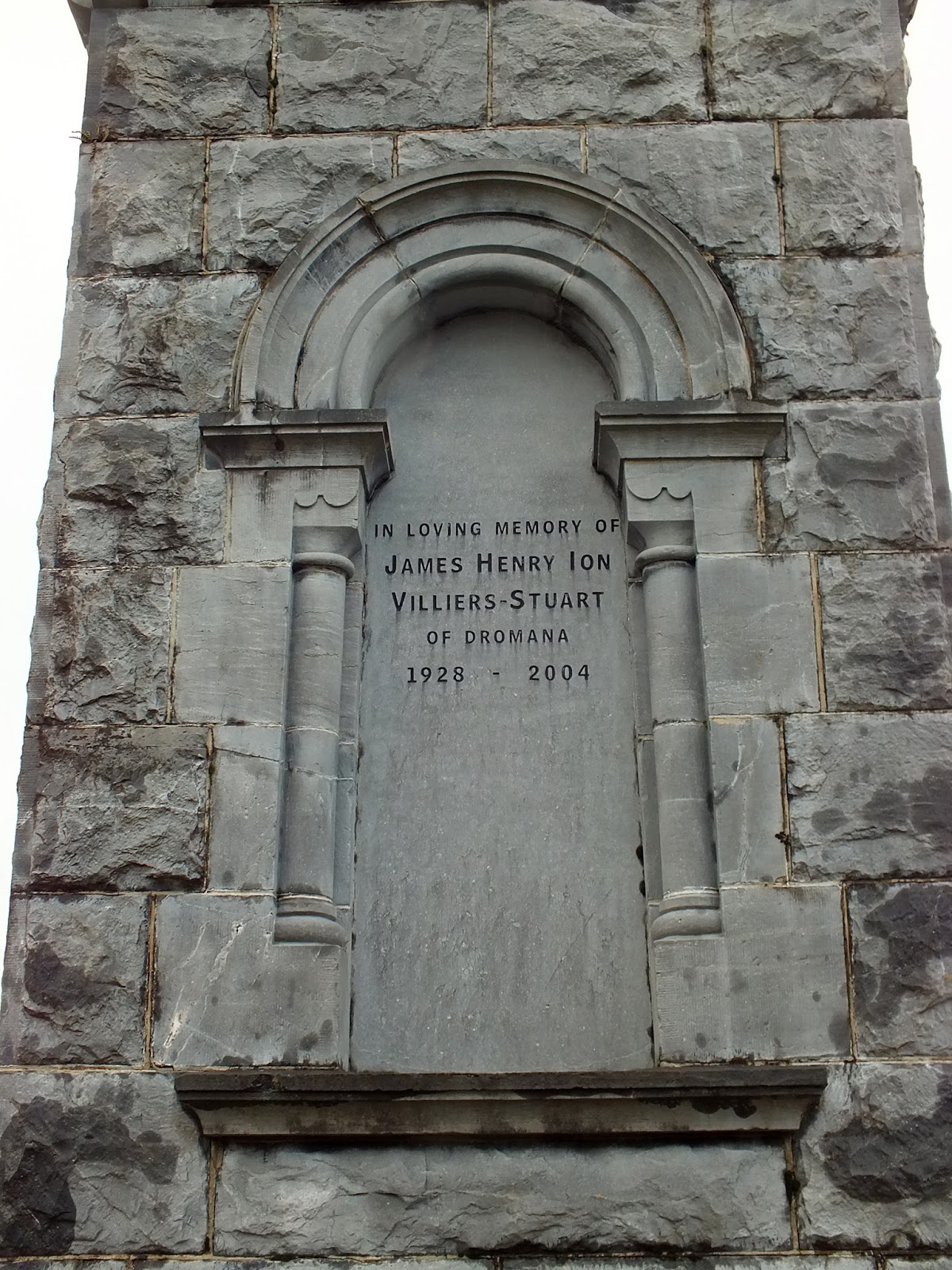 These two pictures are some of the inscriptions on the Villiers-Stuart monument in the main street. 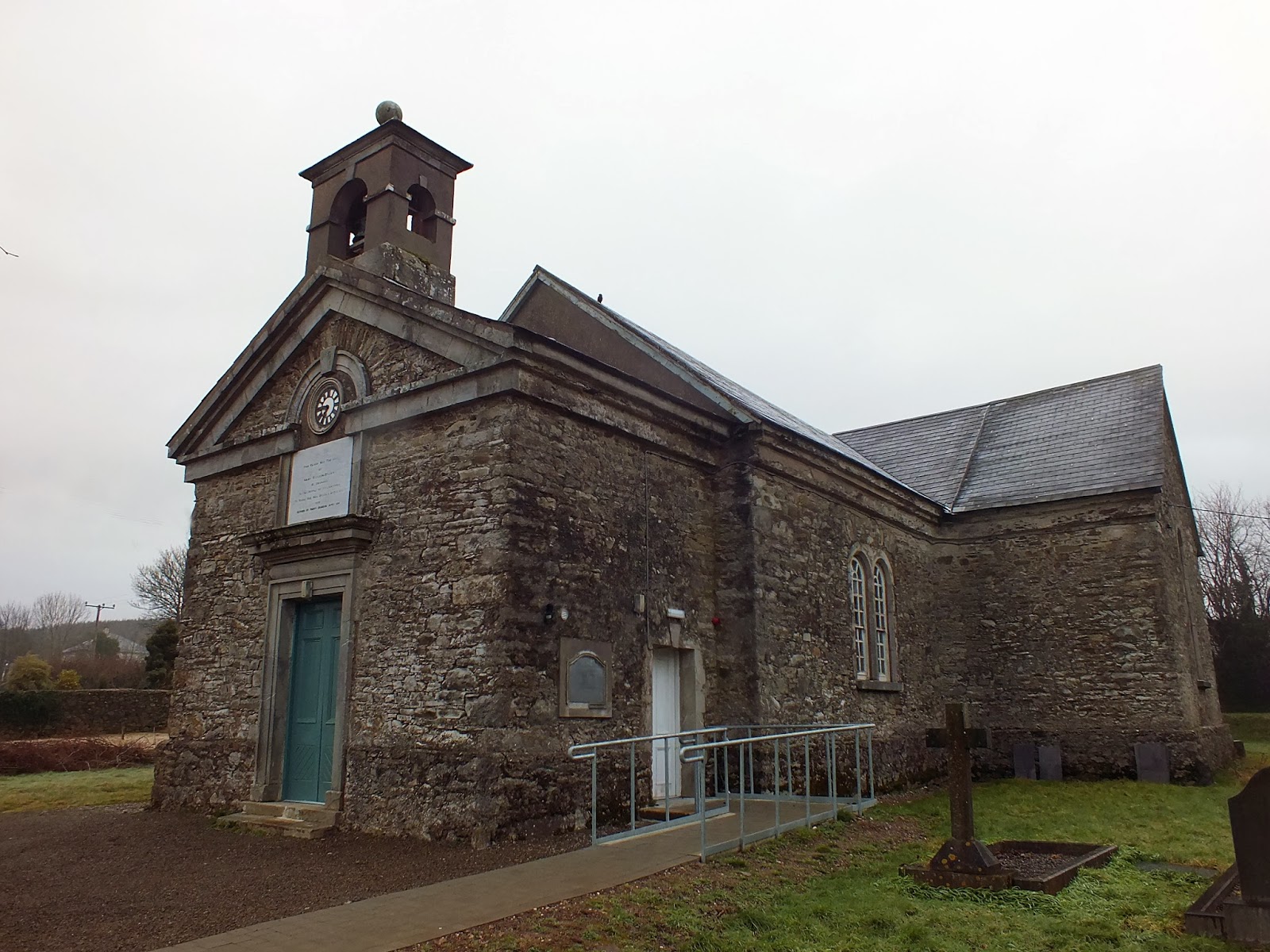 The original church built for the village in the 1740s. 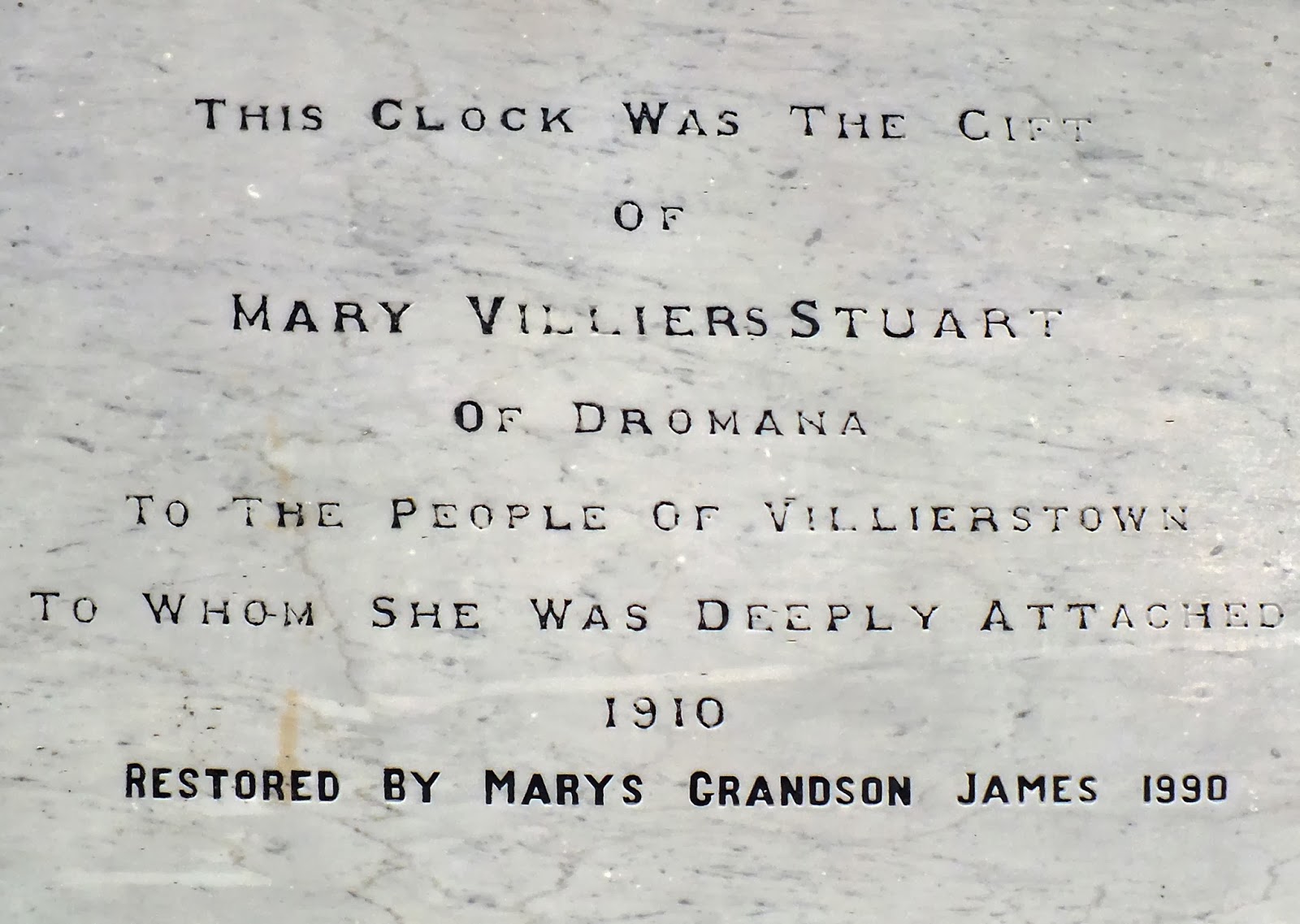 A close -up of the plaque under the clock in the picture above. 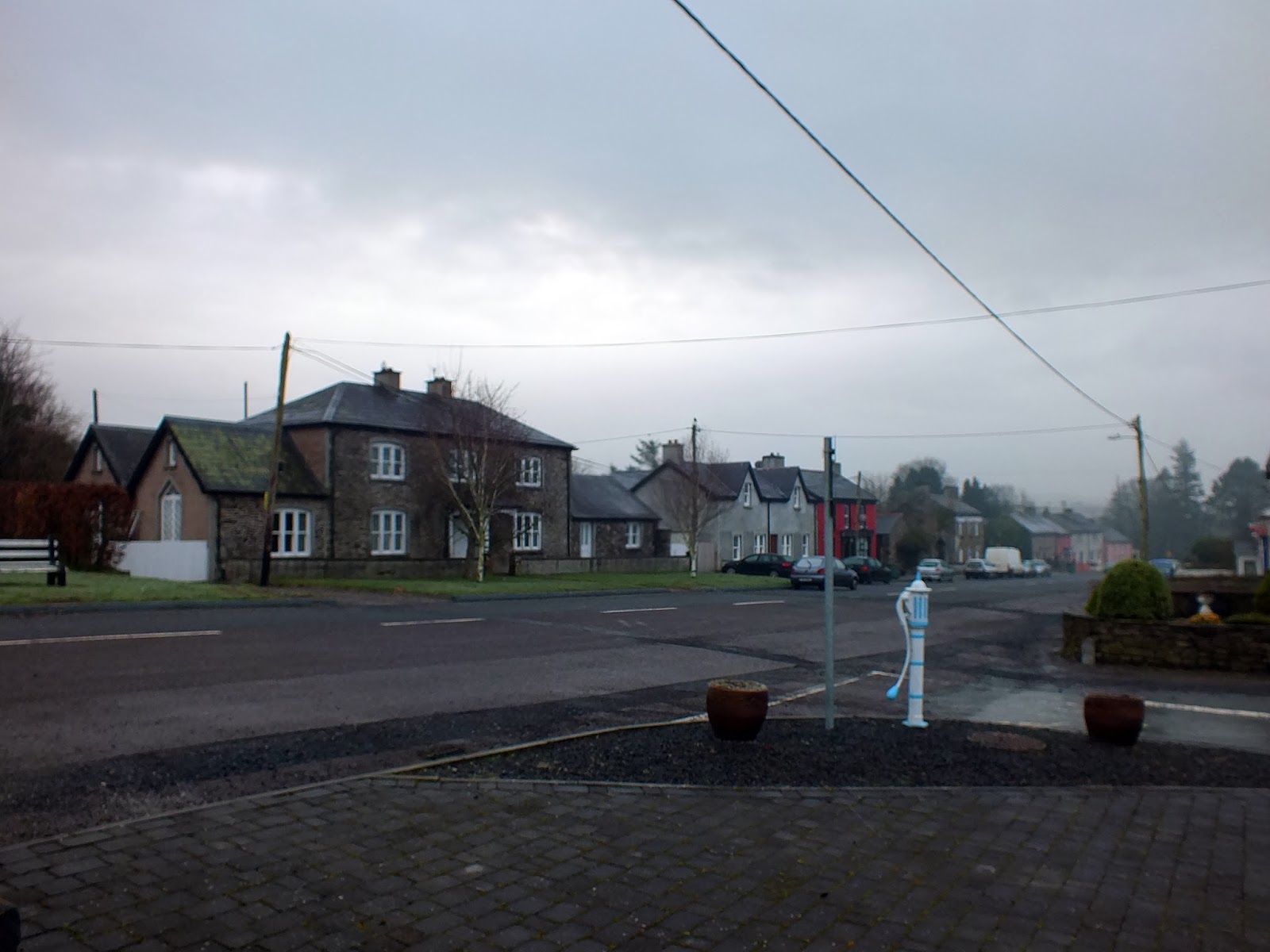 The main street of the village showing some of the original buildings. 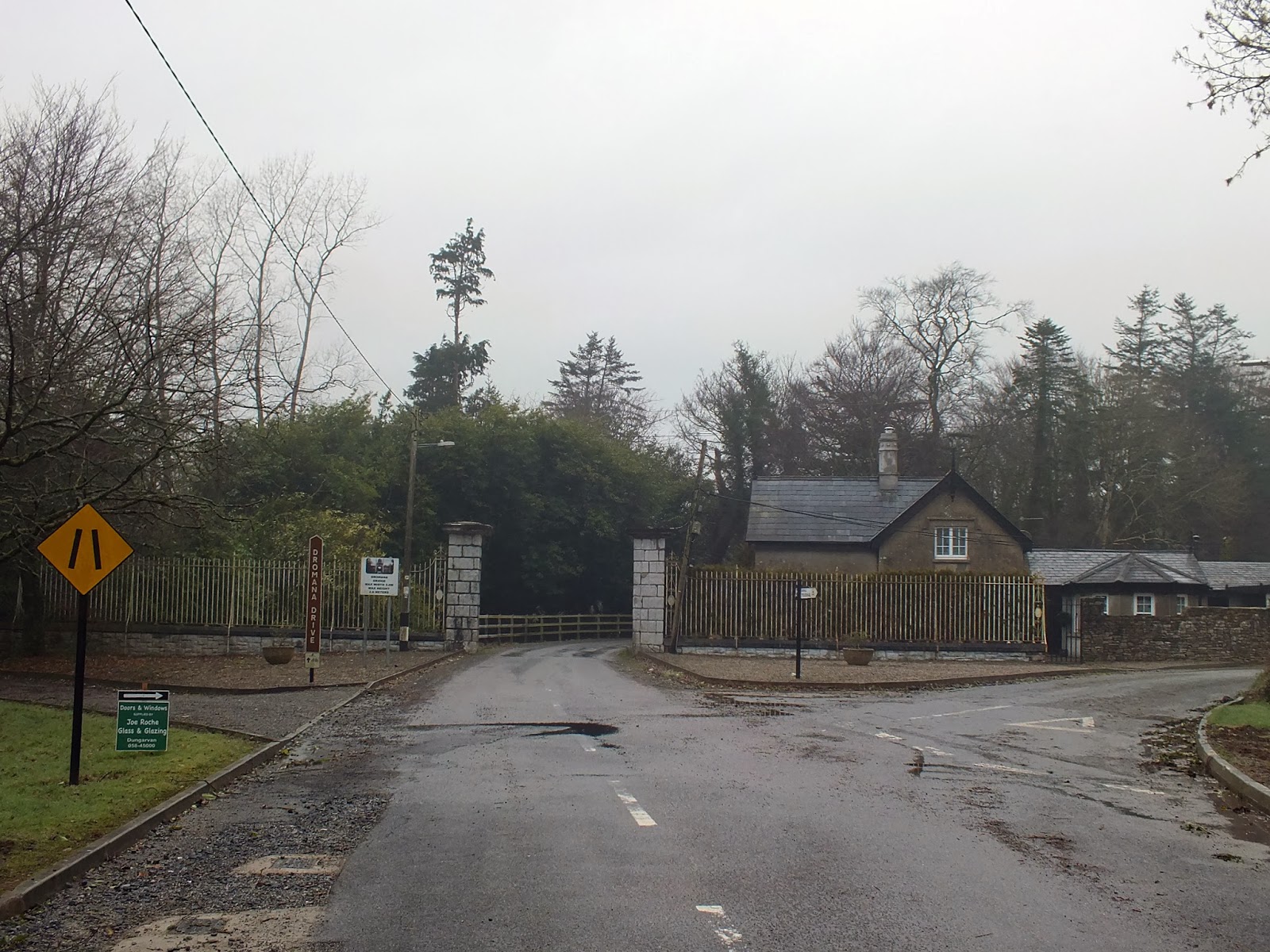 This picture is showing the gateway into Dromana Estate at the northern end of the village. Another interesting place. We`ll leave that for another day.

The following is a link to a company which does cruises on the River Blackwater from Youghal to Cappaquinn. The captain is Mr. Tony Gallagher who is a great raconteur and a lover of all the history and folklore of the river. Highly recommended!  http://www.blackwatercruises.com/

Another usefull link here. It`s for a company based in Cappaquinn who do canoeing trips for large or small parties. Instruction is given for those who are inexperienced. The mans name is Dennis Murray.
A nice fellow.http://blackwaterboating.ie/
Posted by Unknown at 14:53 No comments:

The loss of our hardwoods

On my recent travels around the local area I have been astounded by the huge amount of huge mature trees that have fallen  victim to the recent storms. Among these I have seen ash, oak, beech, walnut and yew just to name a few. So what you might say?                                   The unfortunate thing is that nearly all of these have ended up being chopped up for firewood. As a woodworker who is also a keen woodturner  I see this as a terrible loss of raw materials. This amount of mature hardwoods in a country with as little aforrestation as Ireland might only come around once in a generation. What a shame. 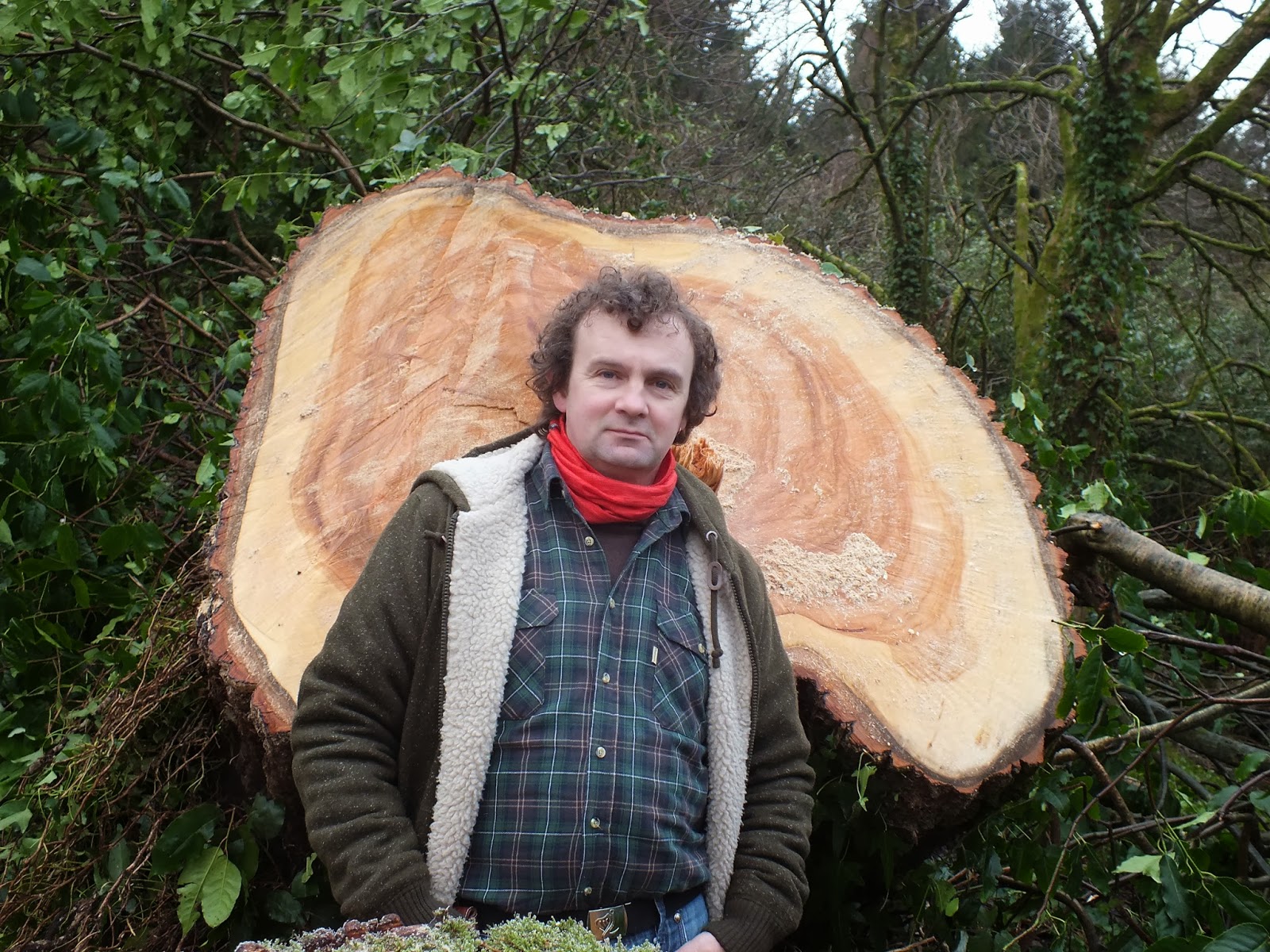 This is the main trunk of the tree whose leaves are pictured above. I think it is a walnut tree. I would appreciate any help or opinions on a definite identification of this one. 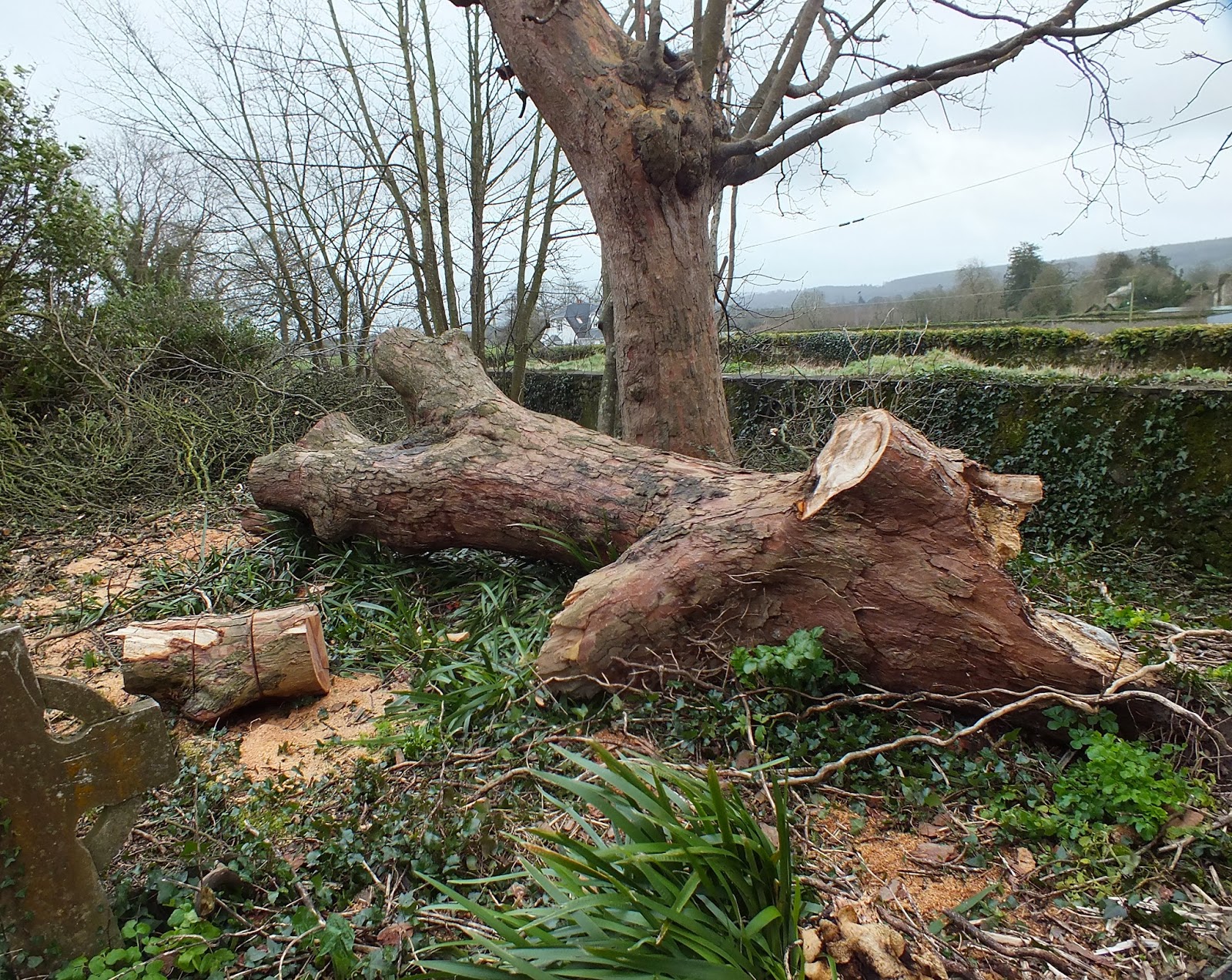 This is one of a number of large yew trees that have fallen i a nearby graveyard. These trees are possibly a couple of hundred years old and like the one pictured above and many, many more are all destined for firewood.
Posted by Unknown at 14:37 2 comments: 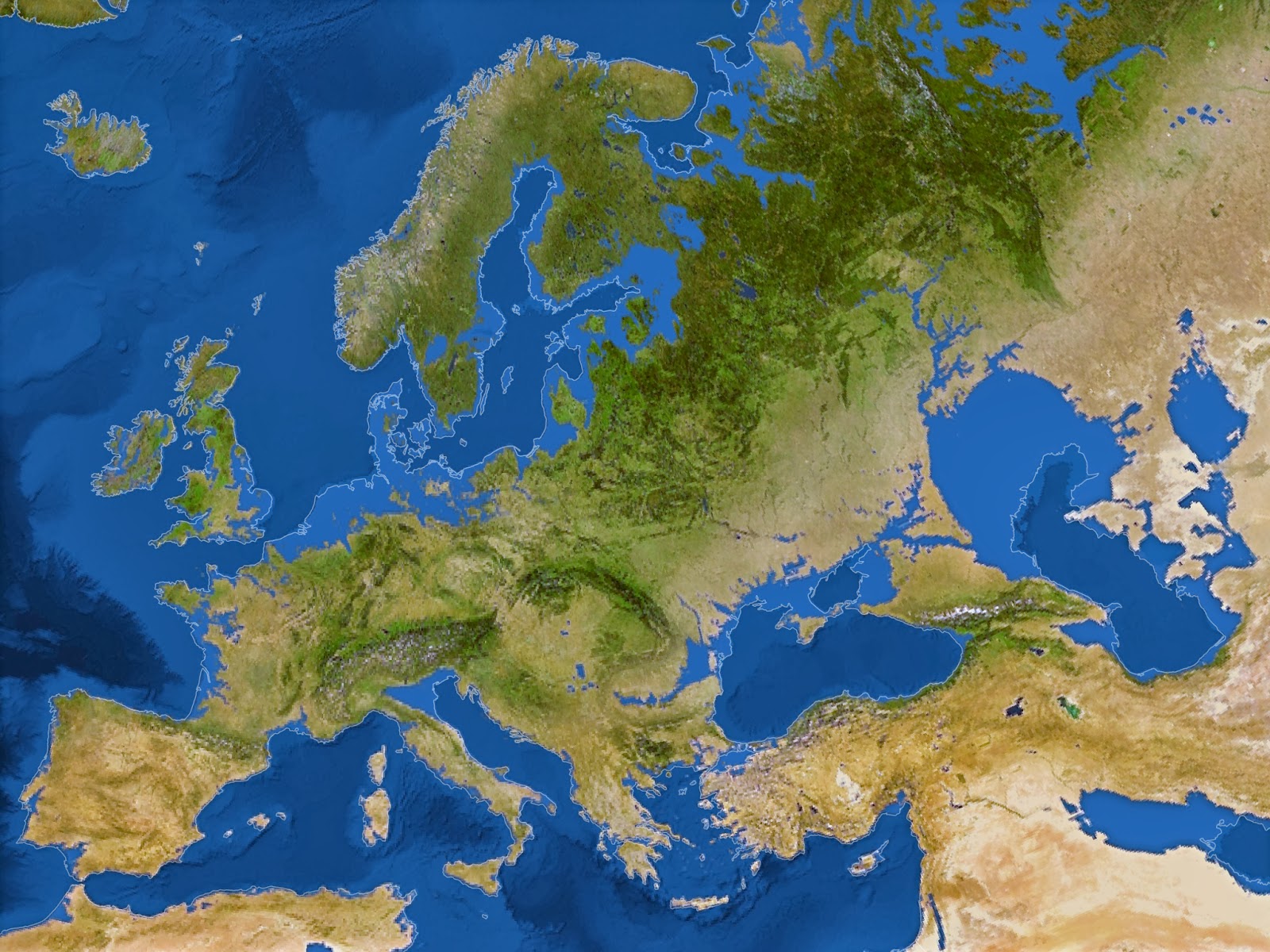 A slightly different topic today. I came on this very interesting article on National Geographic, the subject of which was what the world would look like if all the ice melted. It includes an interactive map which is very good. Playing around with it I can see when zoomed in that the areas around the blackwater valley would look so different. It is probable that the width of the river would increase to a couple of miles in places. I think I might like that.

A welcome (if foggy) break from storms.

This morning I rose early and seeing a nice calm foggy morning I took the camera, threw the breakfast in the bag and went for a spin in the car. It was quite unusual to have a calm blue sky after all the stormy weather that we have been having for the last few weeks.I was hoping to see a few birds along the river but there was an early morning fog so while birdwatching was out of the question I just drove along following the river and enjoying the views. 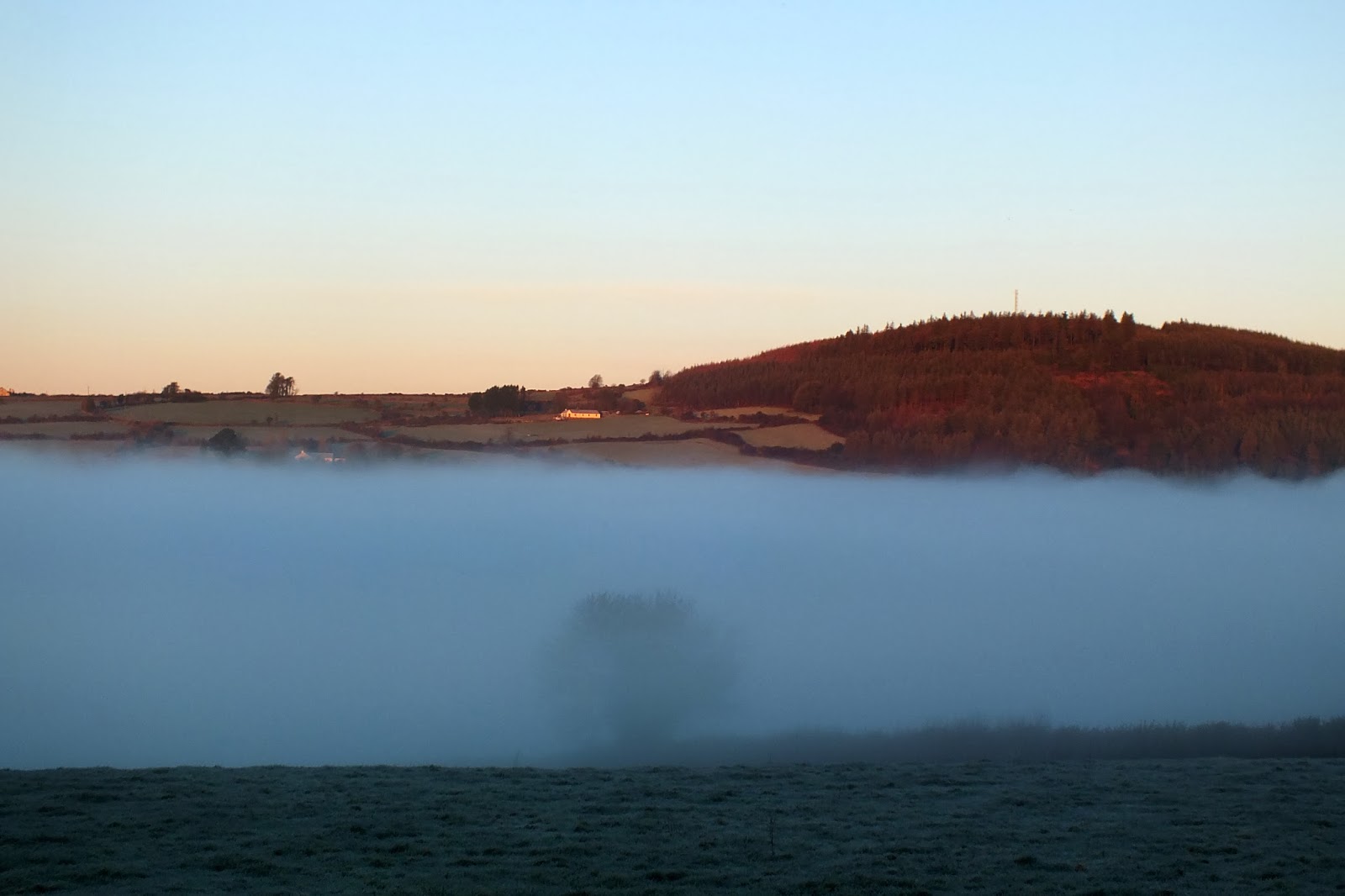 From Coolbagh on the eastern bank looking accross to Strancally on the western bank the dawning sun can be seen on the hillside. 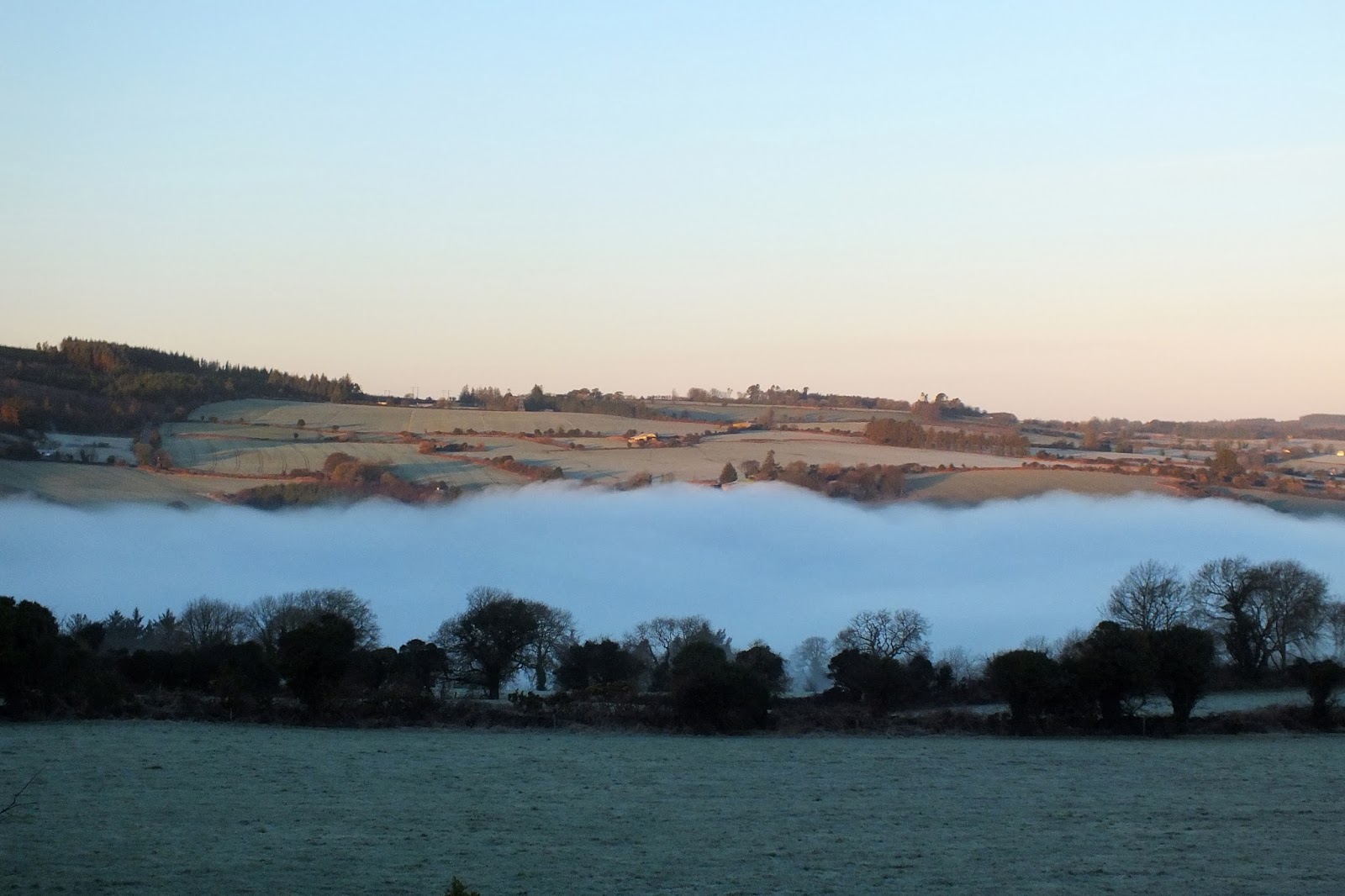 As I moved a little ways north  the fields accross the river have a lovely frosty look about them. 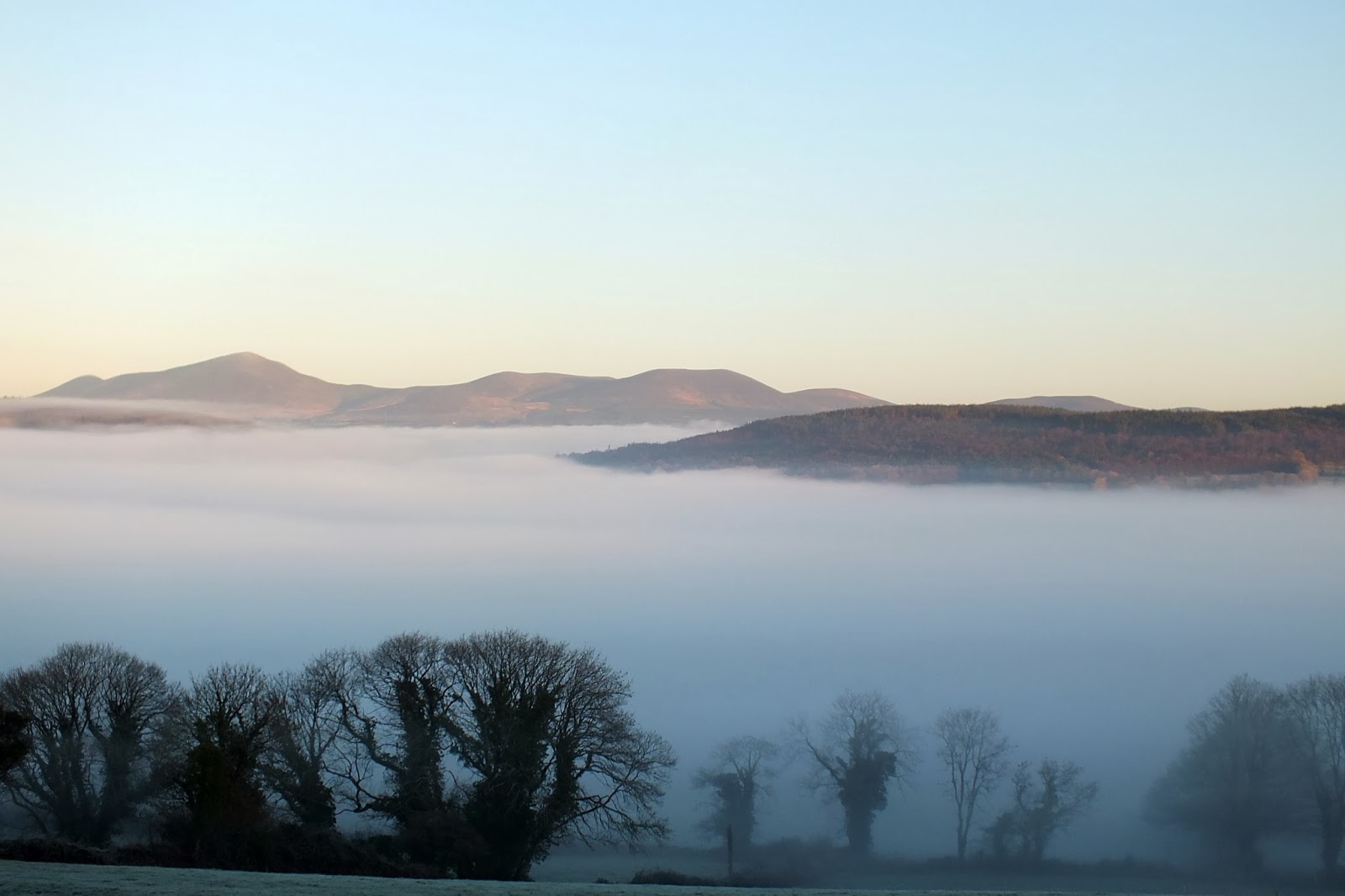 At a point opposite where the River Bride joins the Blackwater there was a lovely vista as the fog could  be seen clinging to the river like a blanket making it quite easy to follow the course of the river as it skirts to the left of Dromana hill and travels northward until it meets Cappaquinn tucked under the Knockmealdown mountains and makes a ninety degree turn left  heading for Kerry. 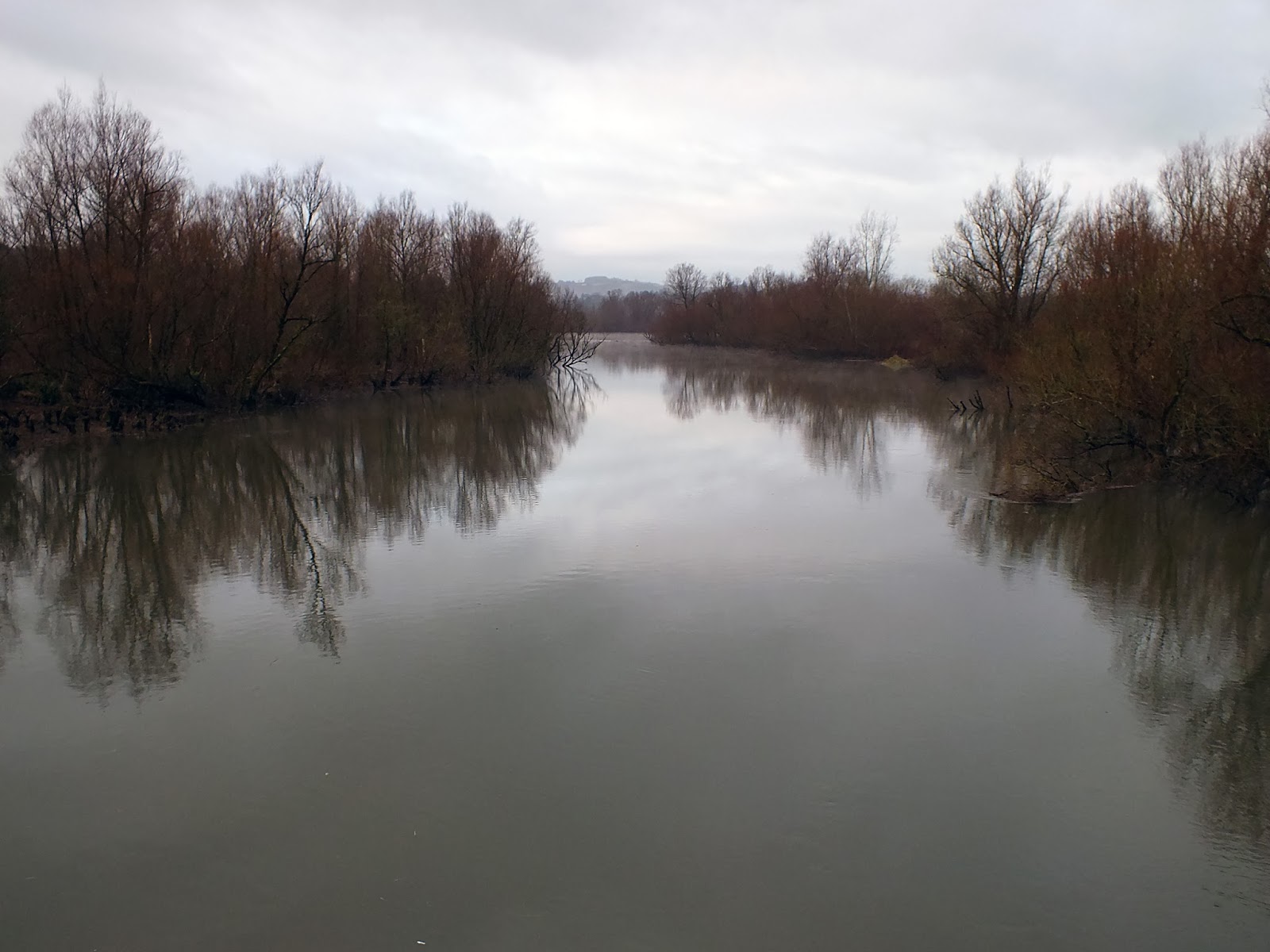 When I reached the River Finisk which is a tributary which flows into the Blackwater on the eastern side to the south of Cappaquinn the weather was already changing. The fog was clearing but the sky was taking on its all to familiar cloudy appearance. This is a view looking downstream along the Finisk to where it meets the main river. 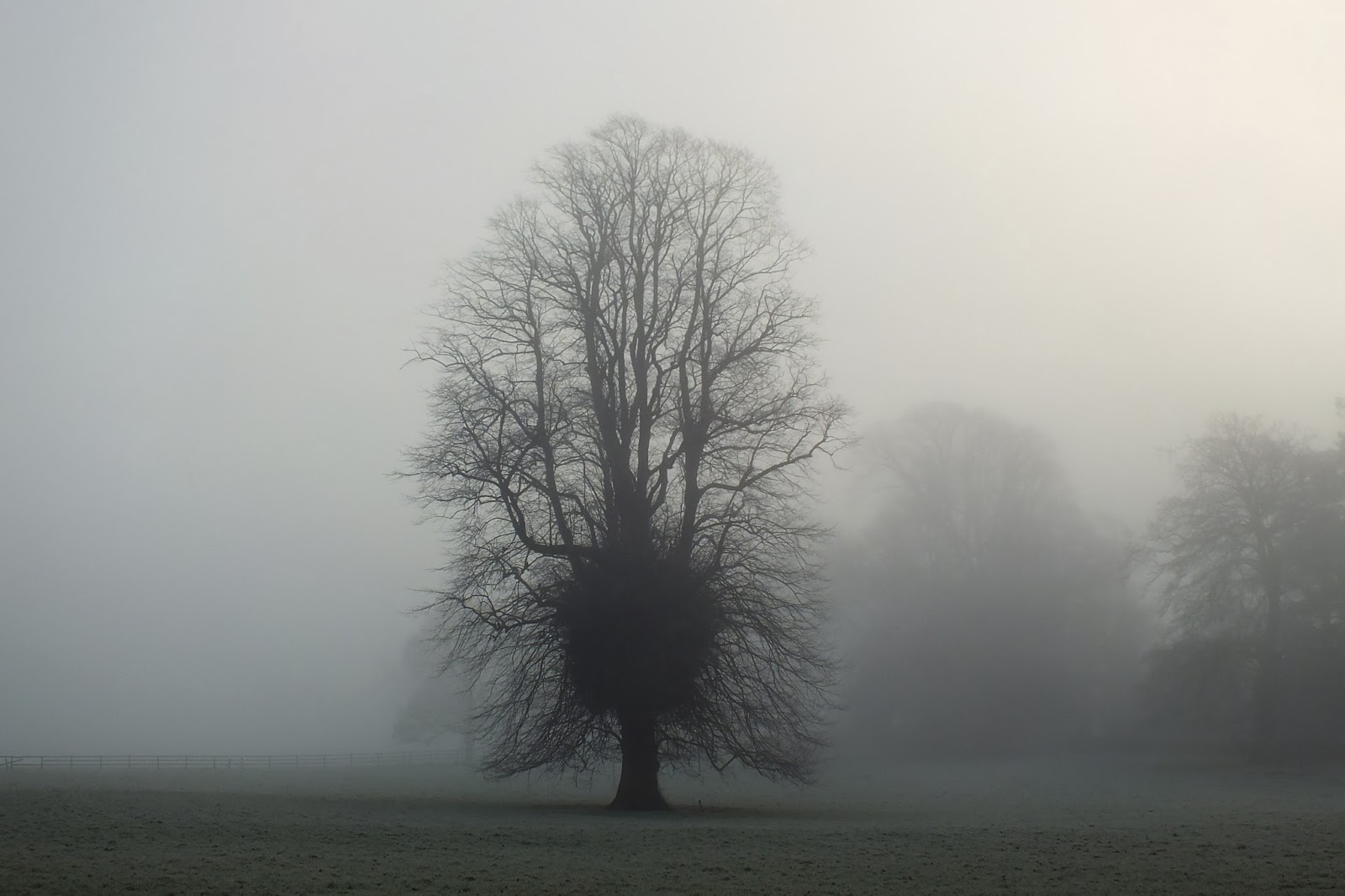 As I neared Cappaquinn I was back in the fog for a while and I spotted these lovely trees silhouetted in the gloom. I didn`t go into the field to check properly but The first one looks like a lime tree which is a favourite with honeybees when conditions are right. 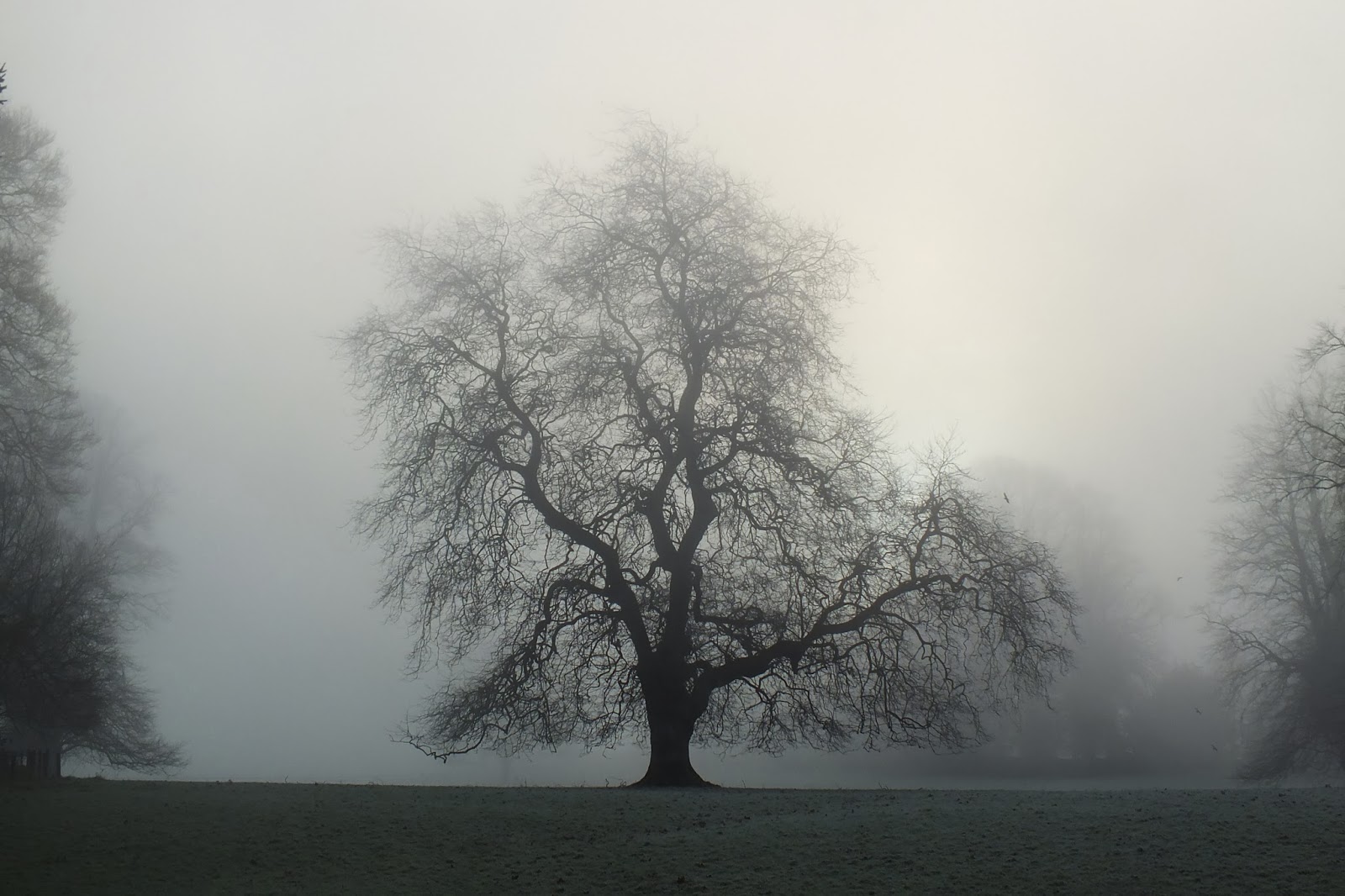 This one looked lovely with the sun starting to come through the fog. Once again I didn`t go close for an accurate identification but this time I am going to go for a chestnut. I am sure somebody will correct me if I am wrong. 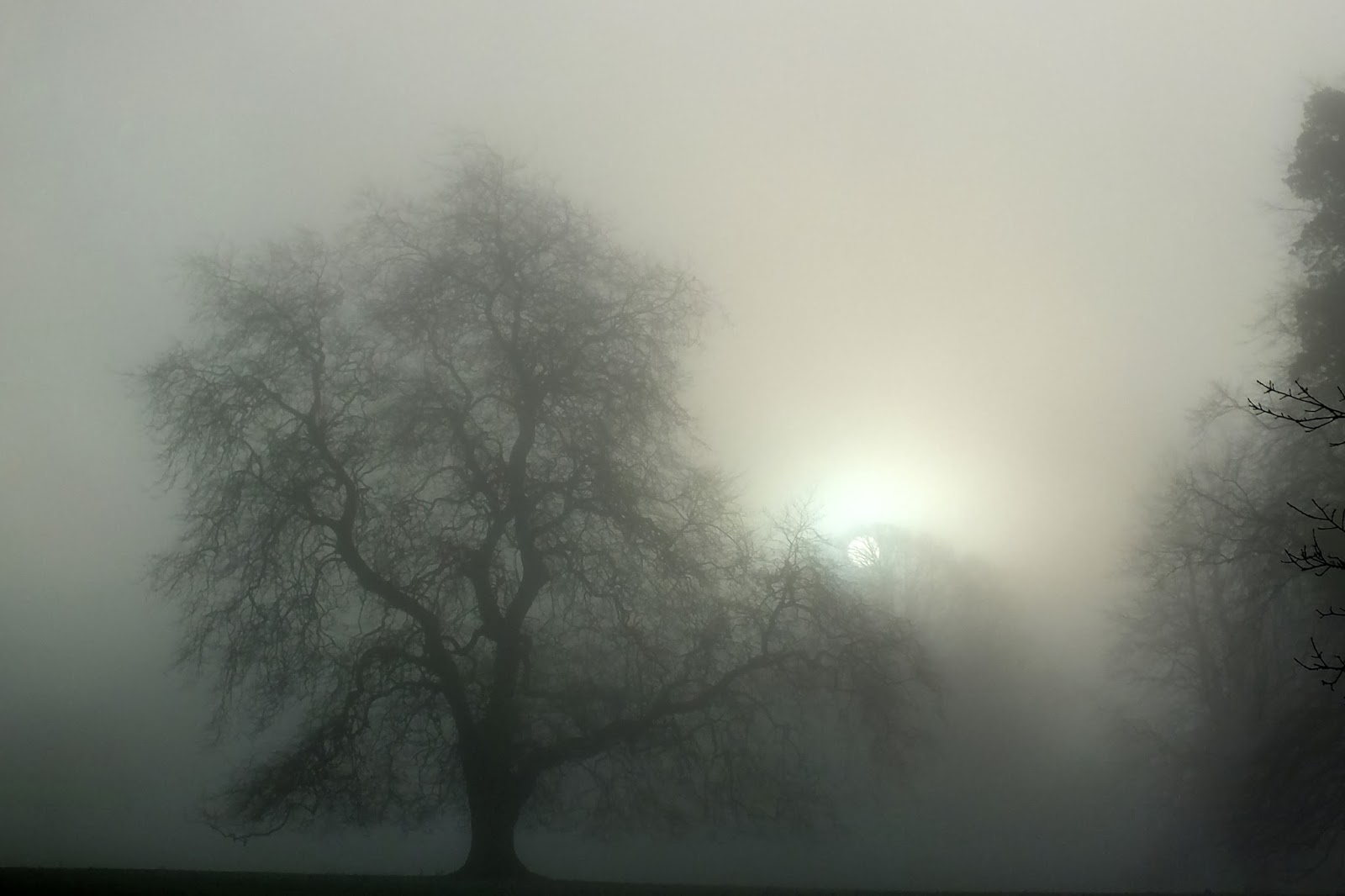 As I drove along today I saw dozens and dozens of trees which had been knocked by the storms, some of which were as big and bigger than these so it was nice to see these fine specimens still standing. Between Cappaquinn and Lismore the river valley widens out and becomes a true flood plain. In these fields farming is only possible in the dryer months of the year as during the wetter times the fields disappear under water. 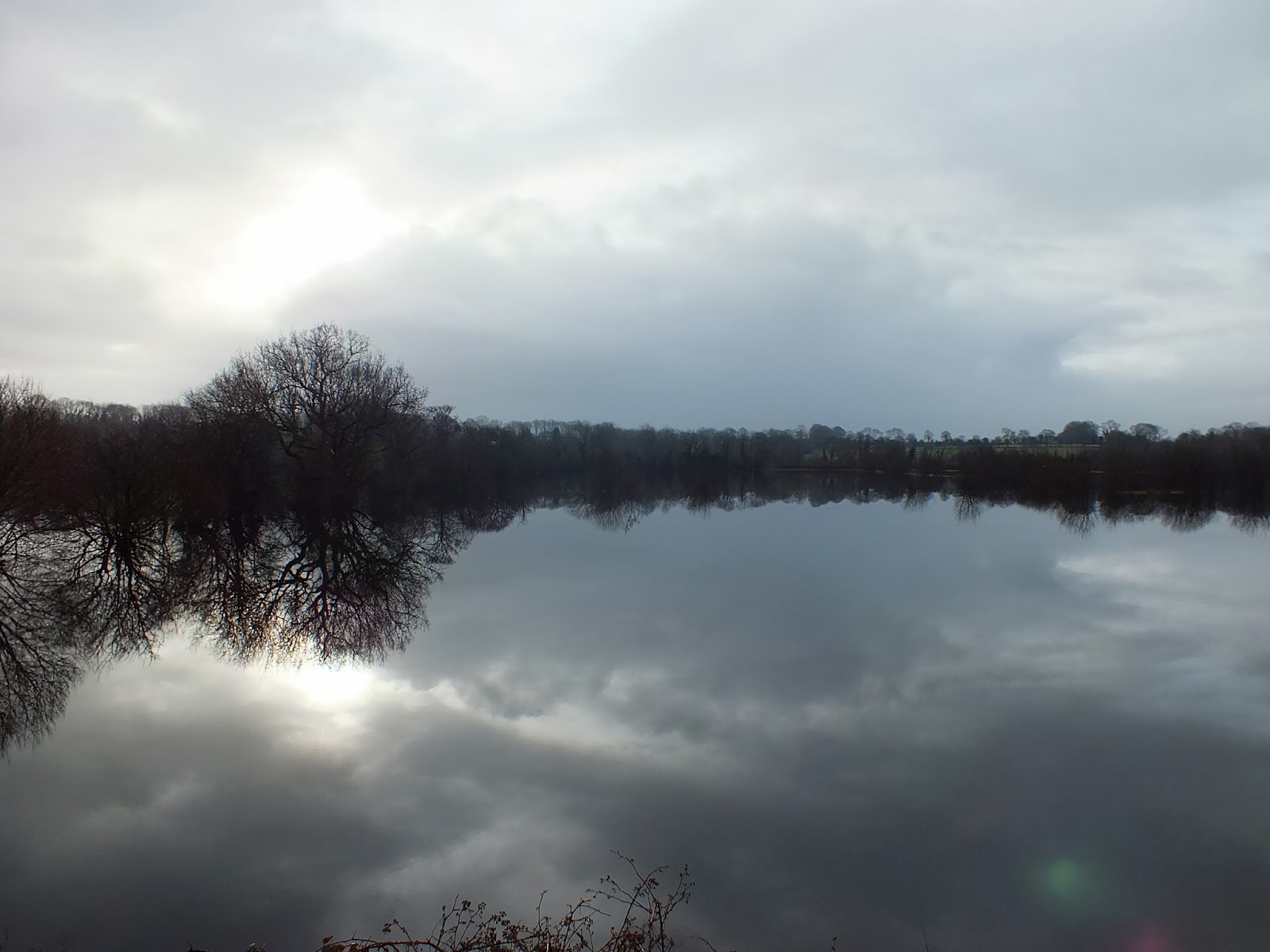 This is another field. Even though the water might not be very deep here there is hidden danger. Somewhere off towards the farthest trees flows the River Blackwater. Where it begins and where the field ends is one of those little mysteries that should not be explored for fear of a certain drowning.
At this stage it began to rain heavily and so ended my little jaunt along the river. Hopefully more to follow with the coming of the spring weather.

This Valentines day coincides with a full moon. Even though the skies have been cloudy for so long now the full moon still tried to shine through. I suppose this is the true "Lovers Moon" trying to shine through all difficulties. For anyone who thinks that they need a hand with this love business here is a link for those of you with a devious touch, and some music to listen to while you are planning.

Away with the birds.

The first picture is of a Yellowhammer taken three weeks ago. All the others were taken this morning.
The males are definitely becoming a better shade of yellow. 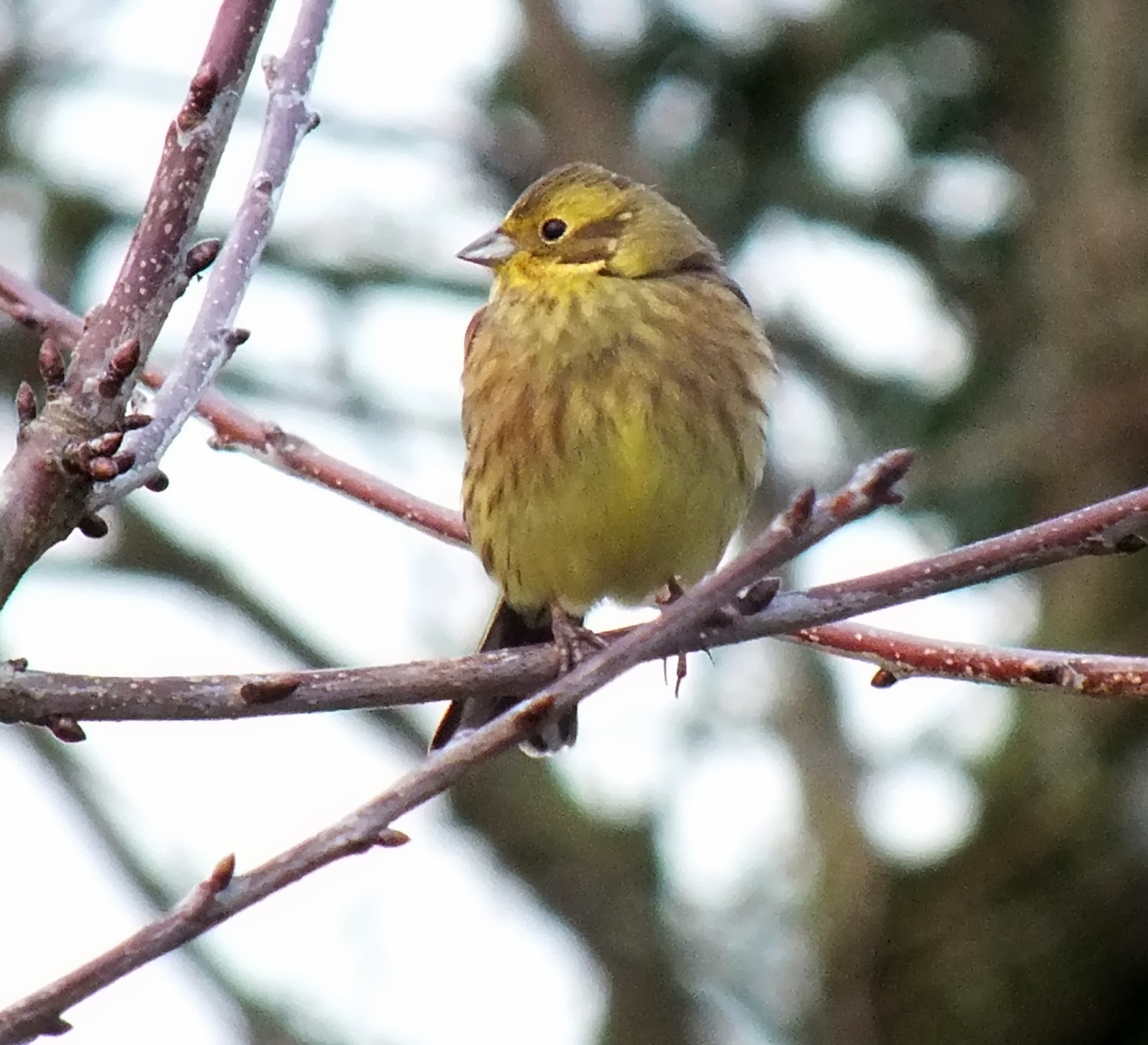 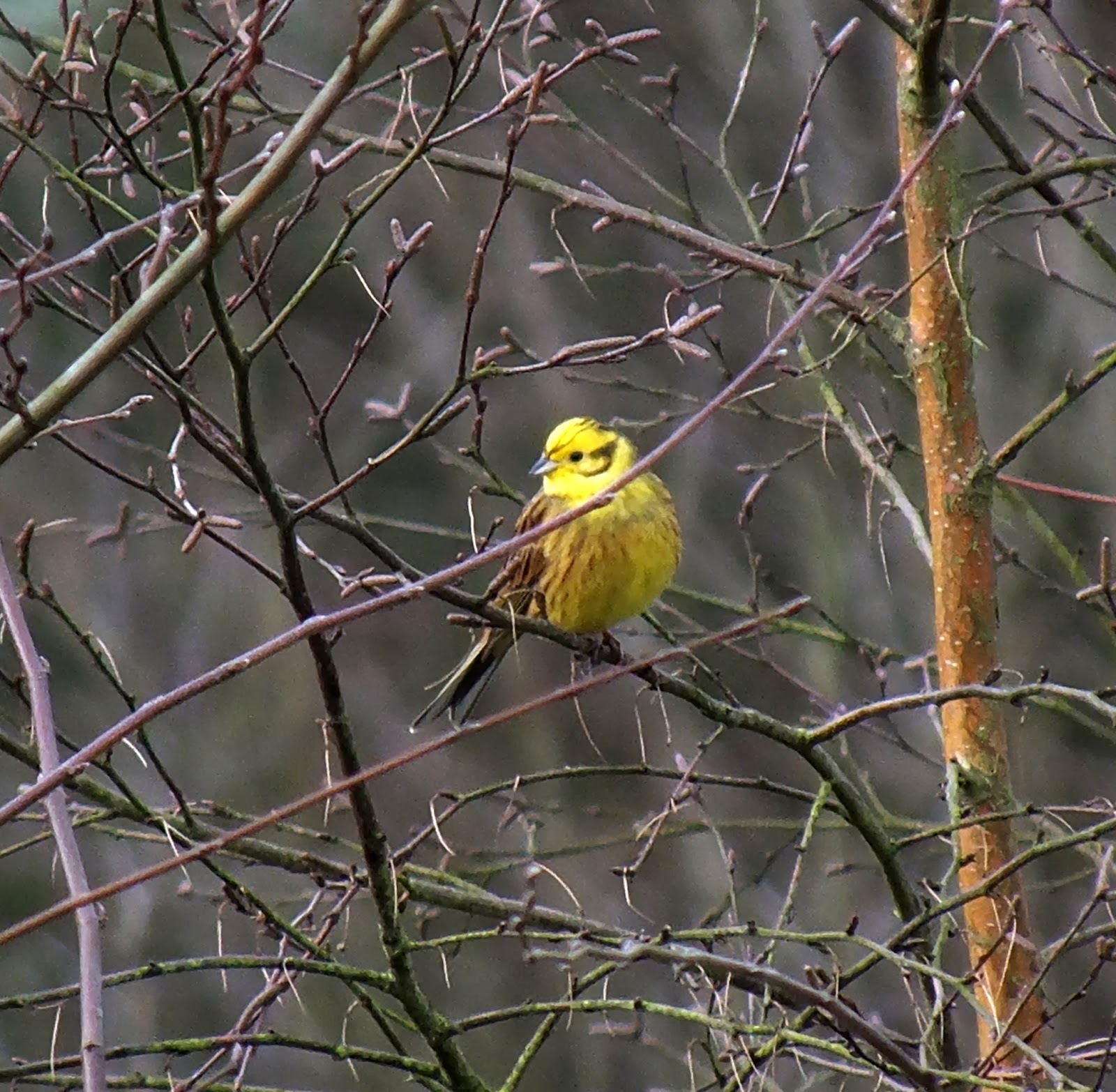 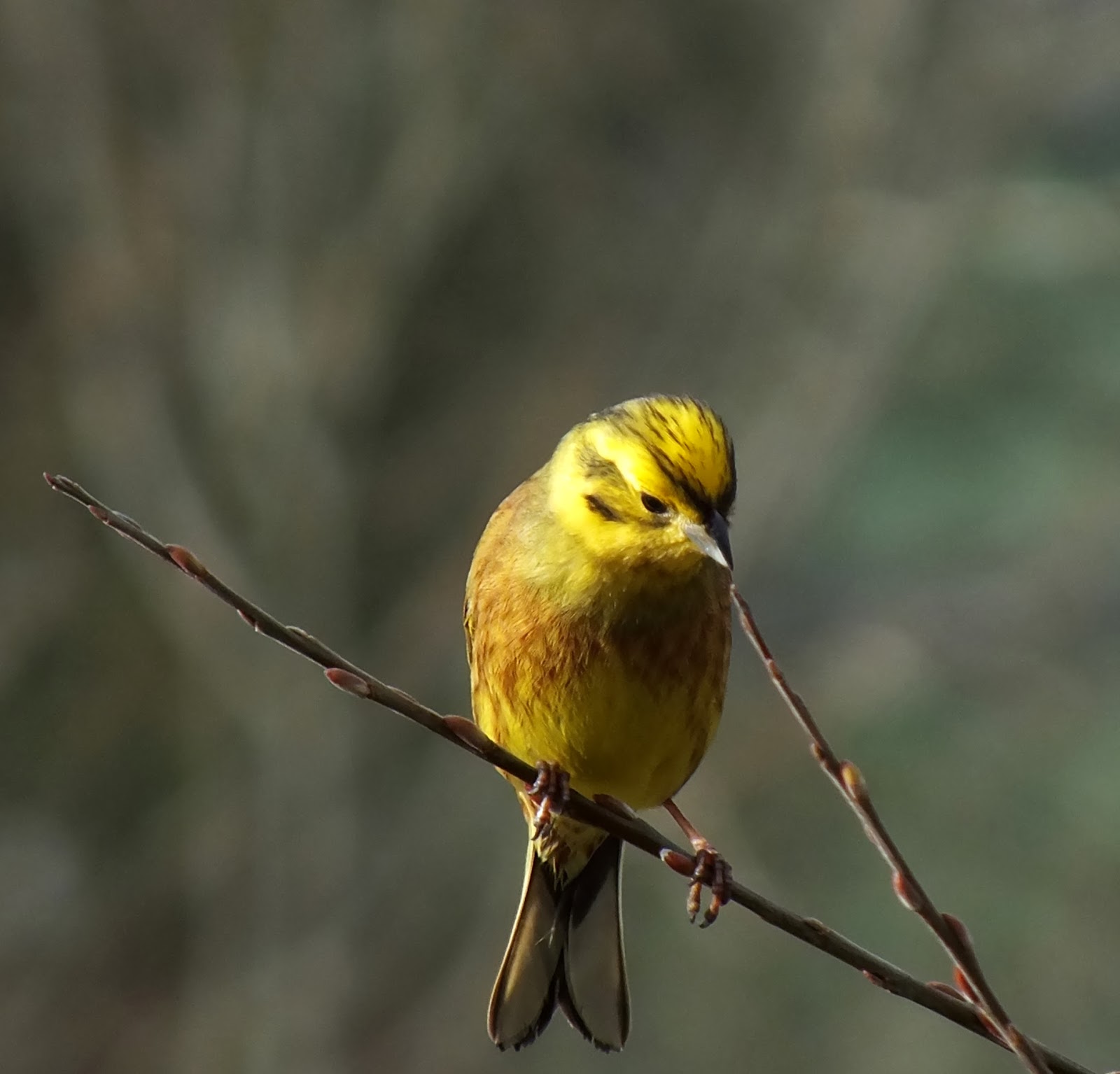 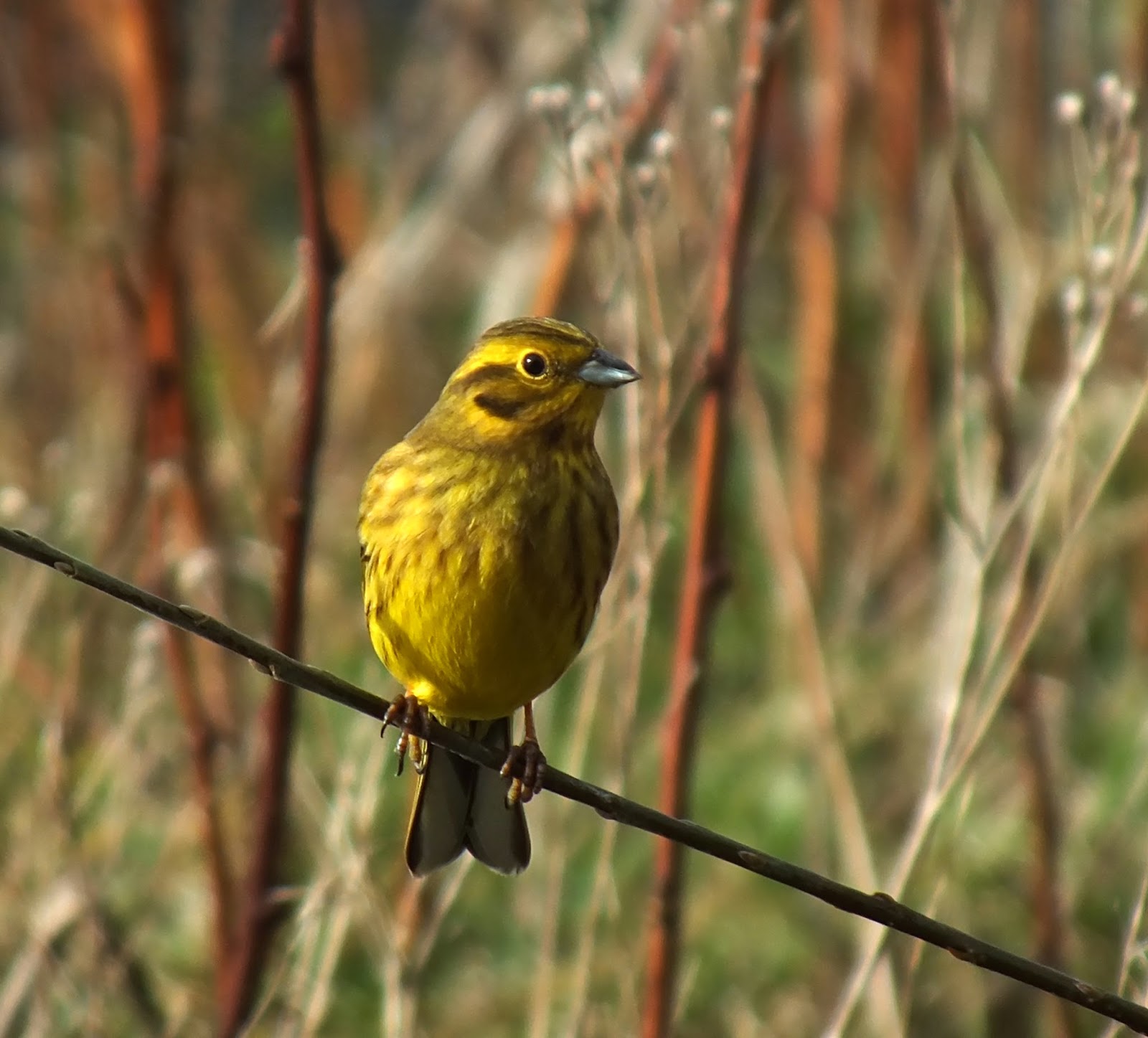 There was up to twenty of these lovely birds feeding together on some spilt grain today.

Whenfeeding on open ground they are very nervous and the whole flock will flee at the slightest noise or movement. 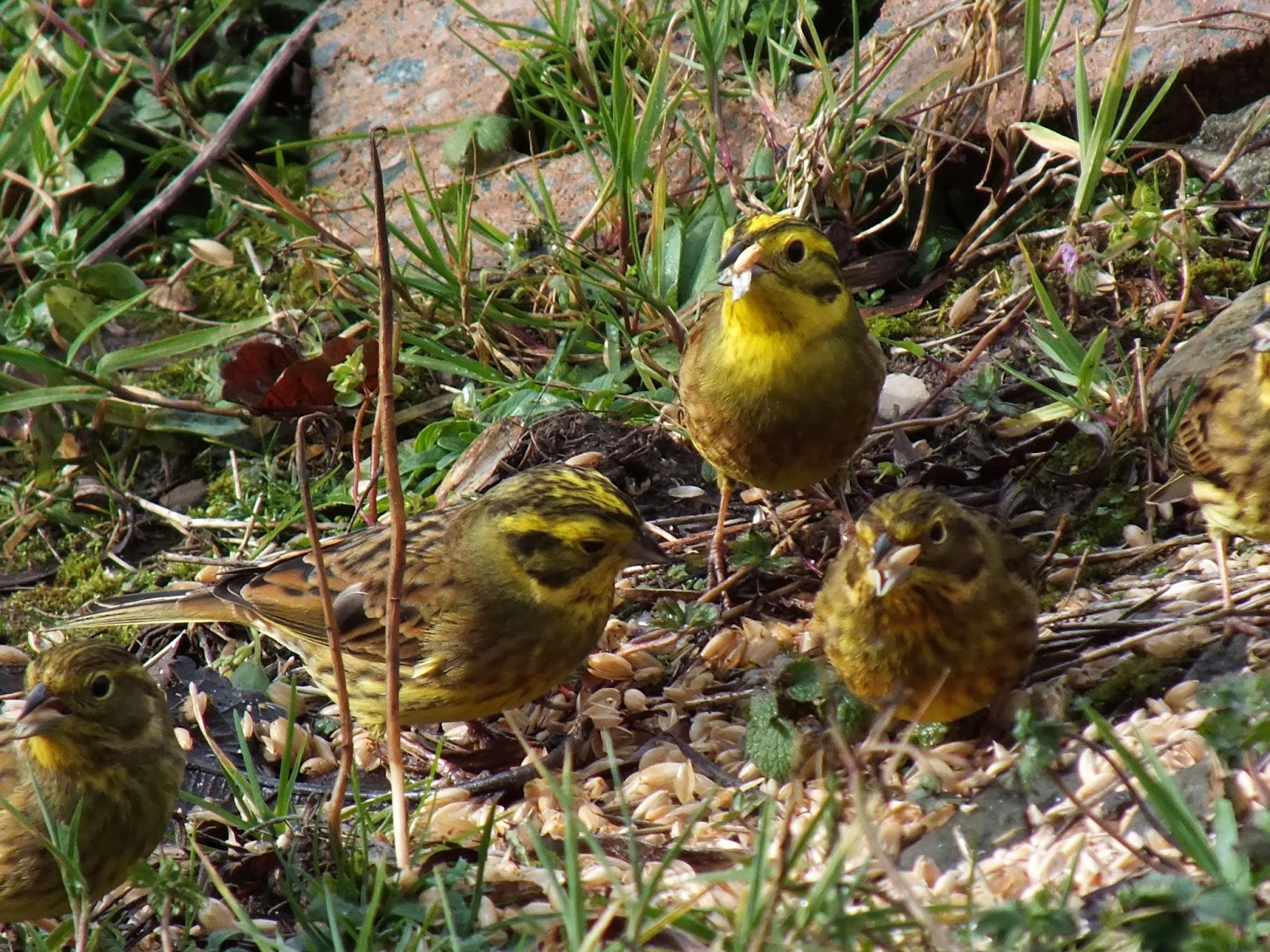 There is a noticeable difference between the male and female birds. 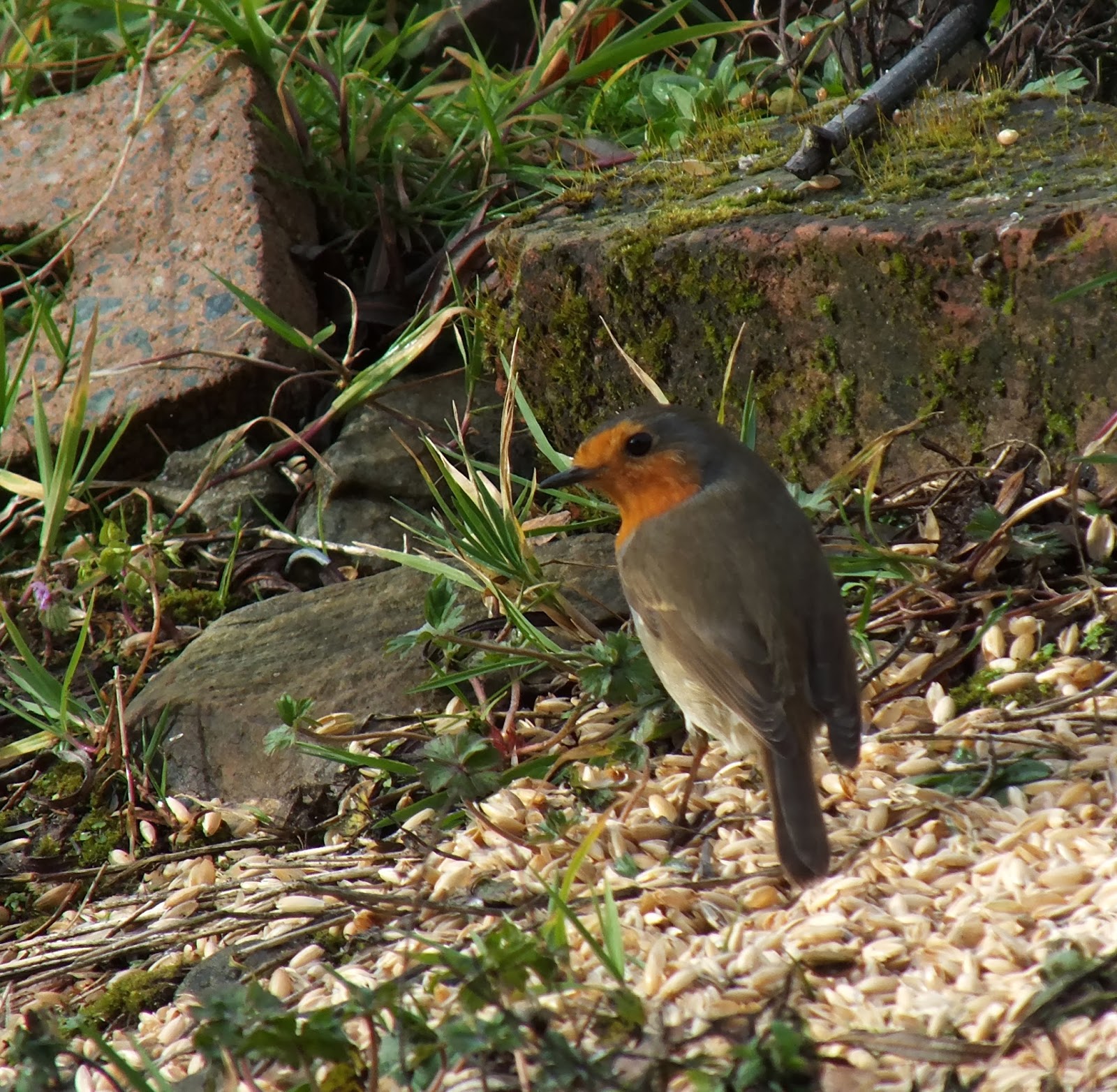 A cheeky robin flew in to swipe some food from his neighbours territory. 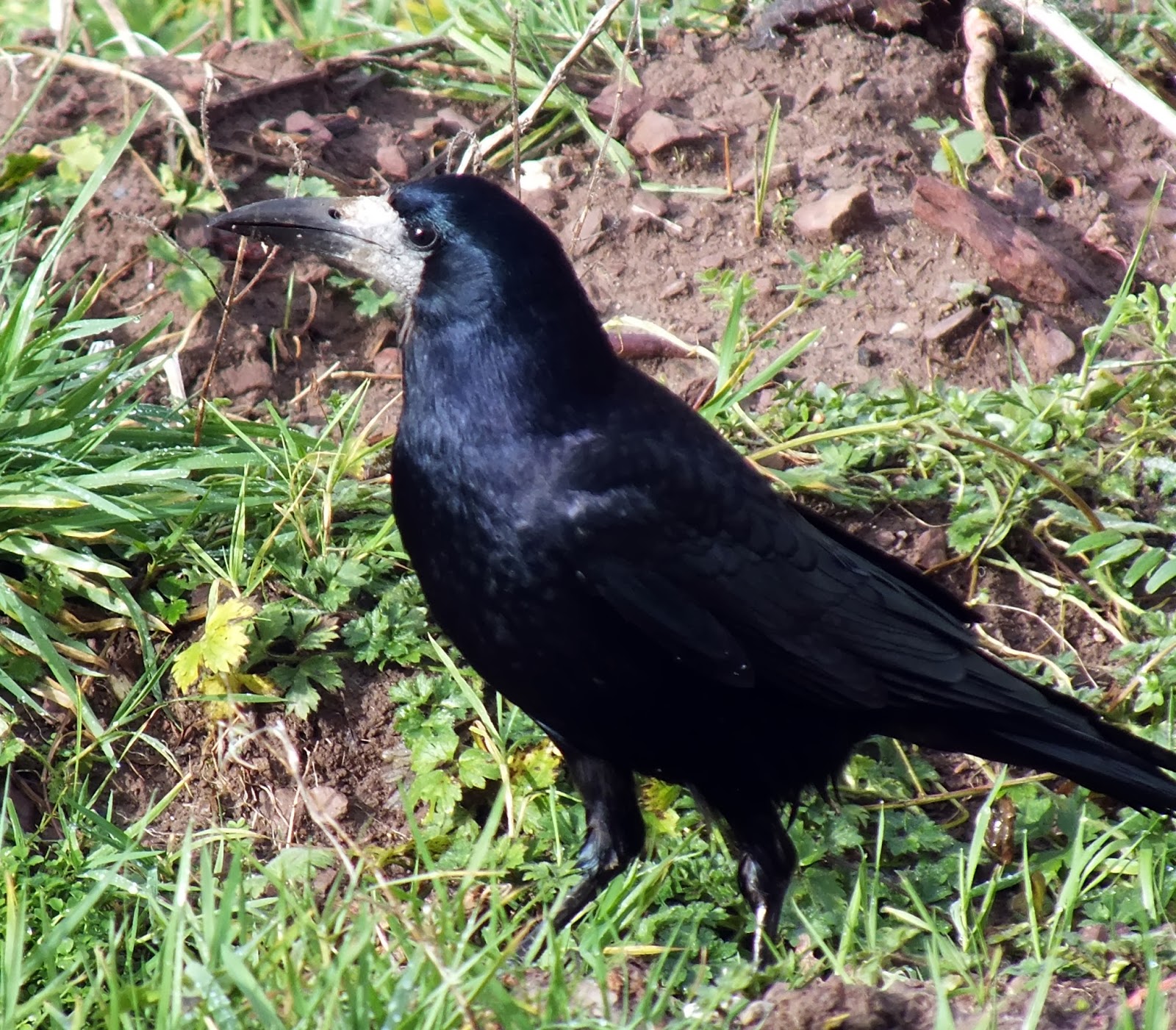 The Rook. A bird with beautifull plumage who could do with a bit of photoshopping on his beak.
Posted by Unknown at 07:10 1 comment: