The latest news filtering through on the saga of the serious downgrading of Youghals only deepwater jetty is that the council have said that an executive decision was made regarding the building of a wall across the jetty and that such decisions do not need consultation with the local councillors. They have indicated that after the wall is built there would be a possibility of looking at it`s removal if warranted. The feeling on the quayside is that this would be unlikely to ever happen. I will post some pictures tomorrow of the ongoing work which has already ruined a section of quayside. One of the buiders said yesterday that they would have been run out of any other town for trying to do what is being done in Youghal.
Posted by Unknown at 06:48 No comments:

The council has agreed to meet with boat owners tomorrow (15/10/13) morning. Hopefully there will be a favourable outcome. It would be good if some of the regional and national press were in attendance.
Posted by Unknown at 13:57 No comments:

To Whom it Concerns,

I have to say that while I welcome the improvements being made to the car park at Nealon's Quay I have some serious concerns about the effect that the planned works will have on the long term use of the area from a maritime perspective.
The plans to re-surface the carpark and add decorative structures will be undoubtably beneficial to the area as it has been neglected for so many years but I must point out that NO consultation with the main users of the area ever took place to the best of my knowledge and I MUST voice some very legitimate concerns.

I had no issue with the car park improvements per-se nor with the sea wall surrounding the seaward edge of the area - it will certainly prevent some of the effects of any storm surge, though not all, and it will certainly not prevent flooding from the effects of unusually hight tides that occur periodically due to Atlantic storms and deep depressions, which can in turn coincide with equinoctial tides and heavy rainfall as happened back in 2004.

Have the Council lost their minds?
This QUAY has always been a quay and it's role is to facilitate the coming and going of vessels engaged in commercial, leisure and other vessels which serve both mentioned categories. Passengers are embarked on a daily basis, disembarked each evening and visiting boats take on water and fuel at this spot - those same boats that are worth a lot of money to the tourist sector in the local economy each summer.
It has come to my attention that the plans to develop the area have been changed, altered or amended to include a pavement and an extension to the sea wall already under construction that inhibits access to the jetty for all except pedestrians.

We have been working hard since 2006 in Aquatrek to develop marine tourism in the town - we believe that Youghal will have to develop this amenity ( the sea) as it's only viable resource aside of the beaches. In any other town this would have been done years ago but yet again I find it incredible that Youghal is turning it's back on the sea, building a wall between it and the very hand that feeds it.
Youghal was once one of the most significant ports in Europe with boatyards, builders and chandlers, merchants and military importance. It could be great again if the powers that be could only realise the value of the asset that we have and have the foresight to develop the marine tourism sector in town….Instead, sadly, we must block it off in case the tide come in!

Nealon's Quay provides the ONLY access to the sea in Youghal for boaters both commercial and leisure.
On a daily basis at least 3 local craft land their catches on the Jetty, Passengers for angling and tourist trips embark and disembark the 3 big charter boats which need wheelchair and emergency access 24/7.
Aquatrek frequently berth passing yachts for periods to fuel and embark while we also berth our own safety boats here. It serves as our dedicated emergency landing area in the event of an accident on the water as required by both common sense and our governing bodies.

If vehicular access is to be denied then so be it, but surely the Council are obliged to provide an alternative?
The difficulty is that being the ONLY suitable access and egress point to the sea on the whole 35 mile stretch of coastline between Cork and Ardmore this quay MUST remain primarily available as a marine berth.

All vessels load and discharge their passengers here. All vessels refuel here but due to the over-silting at the pier head and the fact that all other quays are in a ruinous condition there is no alternative bar the commercial shipping berth at Greene's Quay. This, in turn, is often in use for shipping but in any case is completely unsuitable for small craft as it both also dries out and has an overhang that would damage small craft rising and falling with the tide.

Finally, as a member of the emergency services, I must mention that in recent years the jetty has become the ONLY berth to which to bring a crippled vessel rescued at anytime other than high tide and furthermore it has played a significant role in the rescue of the crew of a vessel that suffered a fire and sank. More recently, and sadly, this quay provided the only suitable landing site for a young boy to be afforded professional medical assistance after an accident at sea. The fact that Ambulances, Responder cars and Coast Guard vehicles were able to use the facilities at this location gave the casualty a fighting chance - one that will no longer be available to any future accident victims and cause delays in treatment that may cost lives..

If any other town had the opportunities or facilities that Youghal has on it's waterfront they would make something valuable from it - I find it so disheartening to see the authorities once again shun that which could potentially lift this town to greatness. Aquatrek have managed to get Youghal listed on the travel guidebooks and almanacs used by sailors and yachtsmen from Ireland, The UK and the Continent and are for the first time offering moorings with a FREE water taxi service to visitors in 2014 in an effort to bring more tourism to our town…I sometimes ask myself why we bother when every step forward we take is towards another wall (literally in this case) being put up against our efforts by the powers that be.

I close this mail by saying that I hold each member of the council responsible in the event that any customer our our loses their life because of any delay in treatment caused by the poor 'improvement' made by that group. If the small fishermen and charter boat businesses decide to close down or relocate to more user-friendly locations it will be hard to blame them but it will be a sad day for a town that once was famous all over the world as a great port.


John Innes
Centre Principal
Aquatrek Sea Skills
+353 86 8593482
Here is a photo of the plans for the works at the Town Quay. We are told the concrete walls added in red are being built. You should know, as they will affect all boat users in the town. 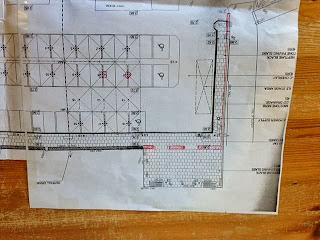